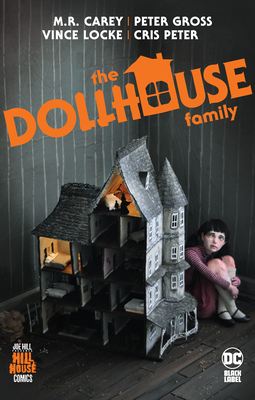 
In Stock—Click for Locations
What secrets does the dollhouse hold?

On Alice's sixth birthday, she got the gift she didn't know she always wanted: a big, beautiful 19th- century dollhouse, complete with a family of antique dolls. In no time at all, the dollhouse isn't just Alice's favorite toy...it's her whole world. And soon young Alice learns she can magically enter the house to visit a new group of friends, straight out of a heartwarming children's novel: the Dollhouse family.

But in the real world, her family life is much darker...and deep within the Dollhouse's twisting halls, the Black Room waits, with an offer to Alice. The house can fix all this, the room says. All she has to do is say the words...

From writer M.R. Carey (The Girl with All the Gifts, Lucifer) comes The Dollhouse Family, from the smash-hit lineup of the Hill House Comics library. Featuring riveting artwork by Peter Gross (The Books of Magic) and Vince Locke (A History of Violence), this chilling collection features The Dollhouse Family #1-6.
Mike Carey is an Eisner-nominated writer, known for Lucifer (2000), Hellblazer, and The Unwritten. He is a prolific, classic Vertigo creator and has written hundreds of comics for DC, Marvel, 2000 AD, and BOOM! Studios. Outside of comics, Mike is a successful novelist as well. His sci-fi horror novel The Girl with All the Gifts was adapted into a feature film in 2016.