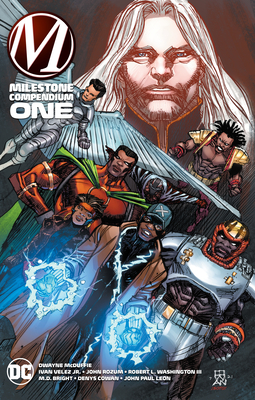 
In Stock—Click for Locations
Milestone Compendium is a can't-miss collection for any Milestone Comics or 90's comics fan!

Some of your favorite Milestone comics from the 90's are collected together in this brilliant compendium edition featuring tales from Dwayne McDuffie and Bob Smith and stunning art from Denys Cowan and M.D. Bright!

Dwayne McDuffie was the co-creator of the Emmy Award winning television series STATIC SHOCK and of Milestone Media, the most successful black-owned comic book company in history. In television, he was a Writer/Producer for Warner Brothers’ JUSTICE LEAGUE UNLIMITED and the co-producer/story editor of Cartoon Network’s BEN 10: ULTIMATE ALIEN. A leading proponent of multiculturalism in media, Dwayne created dozens of characters for comics, television and videogames, notably, Marvel Comics DAMAGE CONTROL and DEATHLOK II, and Milestone Comics ICON and HARDWARE. Dwayne was a multiple Emmy and Eisner Award nominee, and the winner of the 2003 Humanitas Prize.