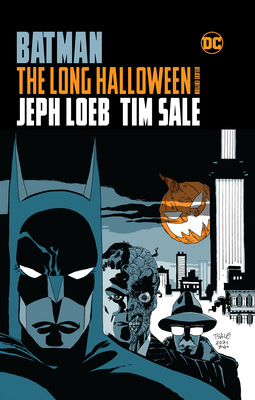 
Not On Our Shelves—Ships in 1-5 Days
Christmas. St. Patrick’s Day. Easter. As the calendar’s days stack up, so do the bodies littering the streets of Gotham City. A murderer is loose, killing only on holidays. The only man who can stop this fiend? The Dark Knight.

In a mystery taking place during Batman’s early days of crime-fighting, master storytellers Jeph Loeb and Tim Sale craft one of the greatest Dark Knight stories ever told. This new hardcover edition includes the full 13 issue miniseries with more than 30 pages of behind-the-scenes extras.
Jeph Loeb is an Emmy Award-nominated and Eisner Award-winning writer/producer living in Los Angeles. In television, his many credits include Smallville, Lost, and Heroes, and in film, Teen Wolf and Commando. In comics, he is best known for his work with the supremely talented artist and partner-in-crime Tim Sale on Batman: The Long Halloween, Superman for All Seasons, and Catwoman: When in Rome for DC as well as Daredevil Yellow, Spider-Man Blue, and Hulk Gray for Marvel.

Tim Sale is the Eisner Award-winning artist of Batman: The Long Halloween, Superman for All Seasons, Hulk: Gray, and more. His art was prominently featured on the hit NBC series Heroes.