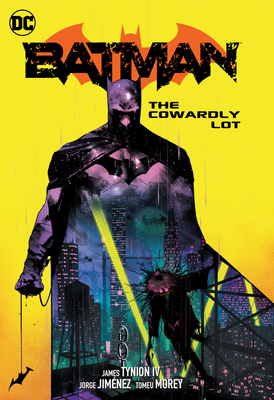 
Not On Our Shelves—Ships in 1-5 Days
Following the tragic events in the Infinite Frontier special, Batman and his new ally Ghost-Maker must reckon with a new gang operating in Gotham City.

The bestselling creative team behind last year's epic "The Joker War" returns for a thrill-packed, dangerous story line as "The Cowardly Lot" begins.

Is the new gang in Gotham connected to the resurgence of the Scarecrow? Meanwhile, Mayor Nakano has a meeting with shadowy billionaire Simon Saint, who has come to Gotham to pitch the concept of an advanced law enforcement project know as...the Magistrate!

It's always darkest before the dawn, especially in Gotham City!

Collects Batman #106-111 and Infinite Frontier #1
James Tynion IV started in the comics business assisting Scott Snyder in writing backup stories for Snyder's groundbreaking Batman series. Tynion soon began writing Talon, a series that spun out of the hugely popular "The Court of Owls" story line. He has also written Batman: Detective Comics, Constantine: The Hellblazer,and Red Hood and the Outlaws and is currently at the helm of Justice League Dark.