Future State: The Next Batman (Paperback) 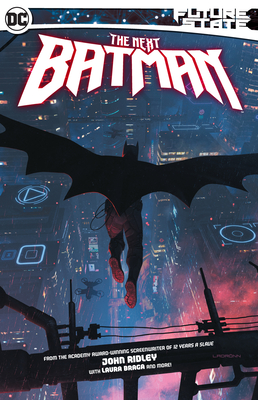 Future State: The Next Batman (Paperback)


In Stock—Click for Locations
The DC timeline has been shattered, and the pieces of a dark possible "Future State" are reflected!

The DC timeline has been shattered, and the pieces of a dark possible "Future State" are reflected! Giant, sprawling future Gotham City is under martial law, protected and regulated by a private security force led by the infamous Peacekeepers. Their mandate is to maintain the safety of the citizens of Gotham, regardless of any Constitutional rights, and to hunt down, incarcerate, or kill all masked vigilantes, villains, and criminals in the city limits. It's a dangerous and violent look at a possible future Gotham City and the heroes and villains who live there!

DC Future State spotlights the World's Greatest Super Heroes in fresh new roles, with all-new characters taking up their iconic mantles. DC Future State features an incredible array of creative talent, combining award-winning writers and artists with new voices from the worlds of TV, movies and animation. Discover the DC Universe like never before!
John Ridley is an American screenwriter, film director, novelist and showrunner, known for 12 Years a Slave, for which he won an Academy Award for Best Adapted Screenplay. After both writing and directing his film debut, the 1997 crime thriller Cold Around the Heart, Ridley went on to write the novels Love Is a Racket and Everybody Smokes in Hell. His novel Spoils of War was adapted into the film Three Kings. Ridley then became a writer and a supervising producer on the NBC crime drama Third Watch. His other novels are The Drift, Those Who Walk in Darkness, and A Conversation with the Mann.