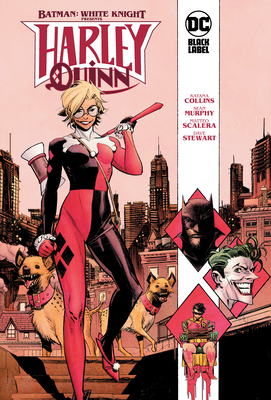 
Not On Our Shelves—Ships in 1-5 Days
The Joker is dead. Batman is behind bars. In a new age of villains, only Harley can save Gotham.

Two years after Azrael wiped out Gotham's deadliest villains in Batman: Curse of the White Knight, the stage is set for a new criminal uprising. From the shadows, a visionary mastermind known as the Producer is assembling a colorful roster of new rogues—headlined by his alluring recruit Starlet, an actor turned serial killer with a vendetta against Gotham's Golden Age film stars.

When Starlet's grisly crime scenes hint at an impossible link to the Joker, the GCPD—aided by eager young FBI agent Hector Quimby—turns to Harley Quinn to crack the case. But Harley is struggling to navigate her new role as a single mother to the late Jack Napier's twins, and revisiting Gotham's underworld—even as a "good guy"—will force her to fight her own worst instincts and flirt with danger.

Determined to prove she can balance it all, Harley accepts Bruce Wayne's guidance and inches closer to the killer—and when the Producer's twisted script comes into full focus, she must confront her past to protect her children and Gotham from a fatal final act.

Novelist Katan Collins and artist Matteo Scalera team up for Batman: White Knight Presents: Harley Quinn—a thrilling standalone addition to Sean Murphy's White Knight universe, expanding on the events of Batman: White Knight and Batman: Curse of the White Knight. This volume collects all six issues of the original series as well as an in-world bonus story originally published as part of the hit digital series Harley Quinn Black + White + Red.
Katana Collins is the writer of novels such as Callback and the Top 100 Amazon bestseller Capturing You. She was also an associate producer on the Nickelodeon show Nick News with Linda Ellerbee. During her time on the show, she won two Emmy Awards for the episodes "Kids and Autism" and "The Untouchable Kids of India." An international author with 15 published books, in a wide range of contemporary romance genres, Collins lives in Portland, Maine, with her husband--author and illustrator Sean Murphy.