Batman: A Death in the Family The Deluxe Edition (Hardcover) 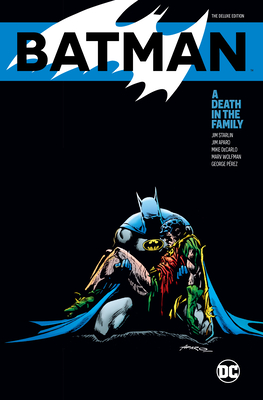 Batman: A Death in the Family The Deluxe Edition (Hardcover)


Special Order—Subject to Availability
Death comes to us all.

In 1988 the pop culture world was rocked when comics readers were given the opportunity to decide the outcome of one of the medium’s most controversial quandaries: Should the Boy Wonder die?

When Jason Todd’s impulsive nature clashes with the Dark Knight’s methodical approach to crime-fighting yet again, Jason takes off on his own in search of his birth mother. Meanwhile, Batman’s latest case leads him to the Middle East, hot on the trail of the Joker, whois brokering the sale of a nuclear device to terrorists! Realizing that they must work together to prevent a global disaster and find Jason’s long-lost mother, Batman and Robin reunite in time to thwart the Clown Prince of Crime. However, this setback sets in motion a far more sinister plot that ultimately leads to betrayal and a deadly date with a crowbar...

The decision to kill off the second Robin drew polarized opinions from fans and critics and remains one of the most controversial story arcs in the history of the Caped Crusader. Would the Dark Knight slip into the darkness of the abyss without a Boy Wonder to hold him back? And would fans ever accept another wayward youth stepping into the role of Robin?

The answers lie in Batman: A Death in the Family The Deluxe Edition, which collects the original Death in the Family tale from Batman #426-429 plus “A Lonely Place of Dying” from Batman #440-442 and The New Titans #60-61, which introduced the third Robin, Tim Drake. This edition also features a brand-new introduction from former DC Comics editor Scott Peterson that delves into the history of this epic story line, as well as the never-before-printed alternate pages from Batman #428 that show what would happen if the Boy Wonder had lived!

Jim Starlin is the acclaimed author of classic graphic novels including, for DC Comics, Cosmic Odyssey and Batman: A Death in the Family, as well as the 1982 Marvel graphic novel The Death of Captain Marvel.  His other works include the space operas Warlock and Dreadstar.

A self-taught artist, Jim Aparo first attempted to break into the industry in the early 1950s at the legendary E.C. Comics group. When E.C. rejected his work, Aparo turned to advertising art in his native Connecticut, where he specialized in illustrating newspaper fashion ads while continuing his efforts to work in comics. His dream was finally realized in 1966 when Charlton Comics editor Dick Giordano hired him to draw a humorous character called Miss Bikini Luv in Go-Go Comics. Sharpening his skills on such features as the Phantom, Nightshade, Wander and Thane of Bagarth, Aparo followed Giordano to DC Comics in 1968 where he quickly gained notice for his smooth, realistic style on such titles as Aquaman, The Brave and the Bold, The Phantom Stranger, The Spectre, The House Of Mystery, The House Of Secrets, Batman, Detective Comics, and Batman and the Outsiders. An artist whose work is still considered a high-water mark for the industry, Aparo died on July 19, 2005.