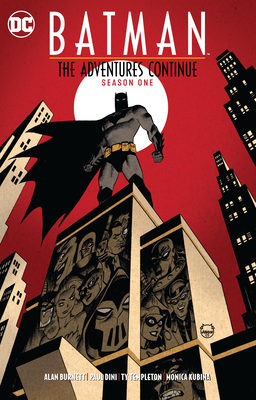 
Not On Our Shelves—Ships in 1-5 Days
I am vengeance. I am the Night.

Step back into the world of Batman: The Animated Series once more!

Picking up where New Batman Adventures left off, Batman comes face to face with a whole host of new adversaries and allies. Someone is stalking the Dark Knight and his comrades from the shadows of Gotham with the sole intent of taking out the Batman! Can Batman figure out why Lex Luthor has come to Gotham City? Who is Deathstroke and what are his plans for Batgirl and Robin? Through all these adventures, a long-buried secret from Batman's past comes to light, and it might just tear apart the Bat-Family once and for all!

Reunited visionary producers of Batman: The Animated Series Alan Burnett and Paul Dini show tha Batman's adventures in Gotham always continue! Teaming up with beloved artists Ty Templeton and Monica Kubina, they bring the treasured animated world back to life for the modern age. Collecting Batman: The Adventures Continue #1-8, this collection features all the original title cards from the digital chapters and character sketches.
Alan Burnett is a television writer/producer particularly associated with DC Comics and Walt Disney television animation. He has had a hand in virtually every DC animated project since the waning years of the Super Friends, including Batman: The Animated Series, Superman: The Animated Series, Justice League, Batman Beyond and The Batman. He recently wrote the DC Universe Original Animated Movie, Green Lantern: First Flight and continues to translate the DC Comics icons for epic television adventures.