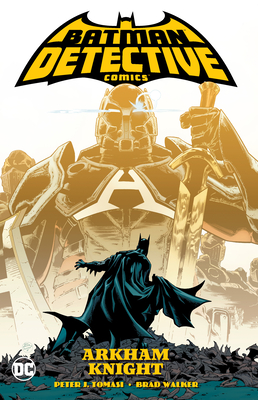 
In Stock—Click for Locations
As a new era dawns, the Batman is facing the most dangerous threat of his career! The Arkham Knight has arrived in Gotham City with an entire round table of deadly allies, and their first encounter will leave Batman shaken to his core.

After Batman's brutal battle with the Arkham Knight, things only get worse when one of his most important allies jumps into the fray, and ends up in way over their head!

Damian was so certain he could succeed against the Arkham Knight where his father failed--and not only was he wrong, but as it turns out, the Knight has a surprising plan for the son of Batman! But when the face behind the mask is finally revealed, we'll learn who's taken up the mantle of the Arkham Knight. What's their endgame? And what's the shocking secret that Batman never knew about a part of his life he'd taken for granted?

Collects Detective Comics #1001-1005 and a story from Detective Comics #1000.
Peter J. Tomasi is a New York Times best-selling author known for his current work on Superman and previous projects Batman and Robin, Superman/Wonder Woman, Batman - Detective Comics, and Batman Arkham Knight, along with other commercially successful books including Green Lantern Corps, Brightest Day, Emerald Warriors, and Nightwing. Over the course of his career with DC Comics—more than two decades of hit books—Peter served as a group editor ushering in new eras for Batman, Green Lantern, and JSA along with special projects like Kingdom Come. Peter also is the author of the creator owned books Light Brigade (Dark Horse) with artist Peter Snejbjerg, The Mighty (Dark Horse) with Keith Champagne and artists Peter Snejbjerg and Chris Samnee, and the critically acclaimed horror/drama series House of Penance (Dark Horse) with artist Ian Bertram.

Born in 1963 in the Year of the Rabbit, Doug Mahnke embarked on a love affair with comics at the age of five. He landed a job drawing comics for Dark Horse at the age of 24. Doug and writer John Arcudi collaborated on Dark Horse’s The Mask and their creator-owned series Major Bummer, originally published by DC. Since then Doug has worked on a wide variety of titles (including Superman: The Man Of Steel, JLA, Batman, Team Zero, Seven Soldiers: Frankenstein, Black Adam: The Dark Age and Stormwatch: P.H.D.) with such writers as Joe Kelly, Judd Winick, Chuck Dixon, Grant Morrison, Christos Gage and Ed Brubaker, just to name a few. He lives in the midwest with his wife and six kids, one dog, and a bunny named Suzie.