How to Be the Best Third Wheel (Paperback) 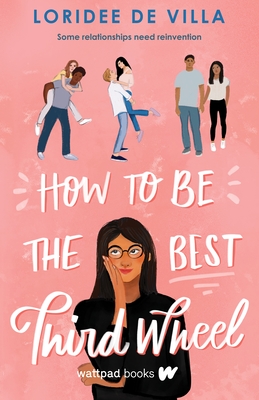 How to Be the Best Third Wheel (Paperback)

It’s the last year of highschool, and everything has changed . . .

After a summer spent in the Philippines with her family, Lara Dela Cruz is eager to start her senior year and, most importantly, reunite with her three besties, Carol, Jasmine, and Kiera. Of course summer is the season of change, and Lara knew she’d have to get caught up on the major updates, hot gossip, and other shenanigans she may have missed. But what she did not expect was to show up on the first day of school to all three of her friends now in relationships.

The mushy public displays of affection and lunches spent gushing about their new “boyfries” has Lara quickly realizing her last year of high school is nothing like she imagined.

Since she’s been back, Lara’s long time frenemy, James, has become impossibly annoying. Sure, they are now both third wheels, but why is he asking her to tutor him in classes? And why, after they start spending more time together, does she begin to notice how cute he looks when he smiles . . . uh oh.

Fighting for the attention of her best friends, catching some pretty new and confusing feelings for James, and wading through the pressures post-high-school plans all have Lara reeling. And to make matters worse, Lara’s beautiful and untrustworthy cousin conveniently appears and wiggles her way right between her and James’ budding relationship. Feeling like a third wheel in more ways than one, Lara must learn to accept that change is inevitable, love is complicated, and being the odd one out is sometimes where inner power is found.

Loridee De Villa is the author of the Watty Award-winning How to Be the Best Third Wheel, her debut novel that has accumulated 1.6 million reads on Wattpad. She also wrote The Infinite Worlds of Ella Jane, which won the Shaw Rocket Fund Contest in 2020 and is being turned into a theatrical podcast by the film company Shaftesbury. When she’s not typing up a new chapter, Loridee spends her days drawing, sewing, and watching cartoons, all while balancing courses at the University of Toronto. Loridee currently resides in Ontario, Canada and is pursuing a career in health sciences.