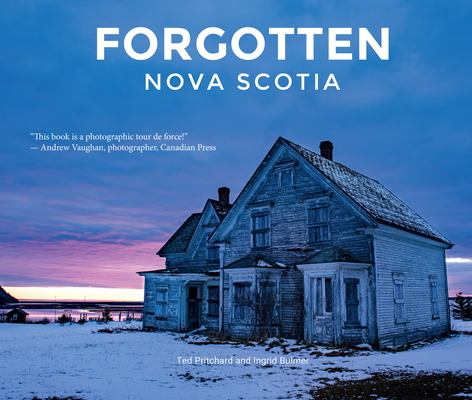 A collection of photographs showing the legacy of Nova Scotia.

The stunning images found in Forgotten Nova Scotia offer a window into our past, showing life as it was then, and stirring in us the emotions of wonder and curiosity about those who have gone before us and the lives they lived.

Nova Scotia is in Ingrid Bulmer and Ted Pritchard's blood, and you might say Forgotten Nova Scotia is their love letter to the province. Where others may see only decay and rot in these long-forgotten locations, Bulmer and Pritchard see exquisite beauty. This is the book they were meant to do.

Ted Pritchard and Ingrid Bulmer were photojournalists for The Chronicle Herald for more than 20 years. Their photos regularly appeared in The Canadian Press and Reuters news agency stories. Their work has appeared in Maclean's Magazine, The Toronto Star, The Globe and Mail and The National Post. Today, Ingrid and Ted own and operate Rattlebox Multimedia Inc. They live in Halifax.