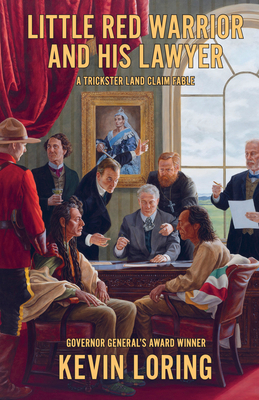 
Not On Our Shelves—Ships in 1-5 Days
Little Red Warrior is the last remaining member of the Little Red Warrior First Nation. One day, he discovers a development company has begun construction on his ancestral lands. In a fit of rage, Little Red attacks one of the engineers and is arrested for assault and trespassing on his own lands. In jail he meets his court-appointed lawyer, Larry, who agrees to help Little Red get his lands back. Larry convinces his wife, Desdemona, to allow Little Red to move into their basement while they sort out Red's case. Desdemona and Red strike up an uneasy relationship. When Red notices that one of Desdemona's eyes is slightly lazy she becomes increasingly neurotic, convinced that Little Red is up to something. Despite herself Desdemona, who is not accustomed to being thrown off her game, is increasingly drawn to Red's apparently hypnotic Indigenous charisma. As sparks begin to fly between them Larry prepares to fight for Little Red's Land Rights. An unexpected intervention by a greater power occurs in the court case, and nothing will ever be the same.
Kevin Loring is a member of the Nlaka'pamux First Nation in Lytton, B.C. As an actor he has performed in numerous plays across Canada including Marie Clements's Burning Vision and Copper Thunderbird, and in the NAC's 40th anniversary production of George Ryga's The Ecstasy of Rita Joe. He also starred in the 2007 feature film Pathfinder, and co-produced and co-hosted the documentary Canyon War: The Untold Story about the 1858 Fraser Canyon War. He is currently the artistic director for Indigenous Theatre at the National Arts Centre in Ottawa. Loring was the recipient of the 2005 City of Vancouver Mayor's Arts Award for Emerging Theatre Artist, Artist in Residence at The Playhouse Theatre Company in 2006, and Playwright in Residence at the National Arts Centre, Ottawa, in 2010. His first play, Where the Blood Mixes, won the Jessie Richardson Award for Outstanding Original Script; the Sydney J. Risk Prize for Outstanding Original Script by an Emerging Playwright; and the 2009 Governor General's Literary Award for Drama. Where the Blood Mixes premiered at the 2008 Luminato Festival in Toronto. Presented at the 2008 Magnetic North Festival in Vancouver, it opened on the day of the House of Commons apology for the legacy of suffering generations of Indigenous people continue to endure as a result of their experiences inside the Canadian residential school system.