A Taste of Empire (Paperback) 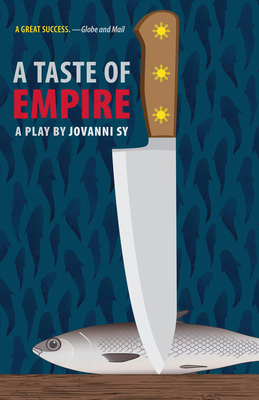 A Taste of Empire (Paperback)


Special Order—Subject to Availability
Everything we eat tells a story. In A Taste of Empire, delectable samples from a real-time cooking demonstration offer food for thought about colonialism and the ethics of modern-day food systems. "Food and Wine named him Chef of the Decade. In 2016 he was inducted into the Culinary Hall of Fame. Recently Microsoft released the hit video game Maximo Cort s: Kitchen Gangsta. You've seen him on television. You've bought his bestselling cookbooks. Now for a limited engagement ... it's the Demon Chef, the Madman of the Kitchen, the Grand Master of Imperial Cuisine ... Chef Maximo Cort's." The premise of the show is a once-in-a-lifetime cooking demonstration by Chef Maximo Cort's, the renowned inventor of his signature-style "Imperial Cuisine." The audience excitedly awaits Chef Maximo's arrival, relaxing with cocktails and complimentary hors d'oeuvres served to their seats. Suddenly their complacency is broken when Maximo's amusing assistant, Jovanni, appears onstage. The celebrity chef in unavailable, but no worries: Jovanni, too, is an expert at preparing the traditional Filipino dish Rellenong Bangus (Stuffed Milkfish), and the audience follows along on a journey filled with humorous banter and a silky milkfish, sharp chef's knife in Jovanni's hand. As he cooks, he deconstructs the dish in humorous and surprising ways, serving up opinions on the European colonization of Asia, the state of modern agriculture, the ethics of food distribution and consumption - only a few of the ideas sampled in this engaging performance piece. When the actual fish dish is cooked and ready to eat, audience members are given tasting plates and even more food for thought. A Taste of Empire is truly a feast for the mind and palate. We call it "Iron Chef meets Guns, Germs, and Steel." Bon appetit Cast of 1 man.

Jovanni Sy is a playwright, director, actor, and the Artistic Director of Gateway Theatre in Richmond, BC. In 2010, Jovanni wrote and performed A Taste of Empire which was nominated for two Dora Mavor Moore Awards including Outstanding New Play. It was subsequently remounted by Vancouver's Boca del Lupo Theatre. A Cantonese version of A Taste of Empire was translated and performed by Derek Chan (with Jovanni directing) in 2016. Other writing credits include The Five Vengeances, a comic kung-fu adapation of The Revenger's Tragedy and the libretti to the chamber operas, Haiku Moments and The Cellar Door. Jovanni is currently developing the play Nine Dragons, a detective story set in 1920s colonial Hong Kong. Jovanni's directing credits include God of Carnage, Antigone, and Blackbird (Theatre du Pif in Hong Kong) and Closer Than Ever, Valley Song, and Harvest (Gateway Theatre). In June 2015, he directed Clifford Cardinal's award-winning play Stitch for Native Earth Performance Arts. Jovanni has performed with theatre companies across Canada and overseas.