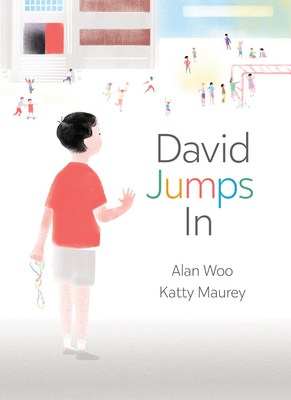 By Alan Woo, Katty Maurey (Illustrator)
List Price: $19.99
Our Price: $17.99
(Save: $2.00 10%)
On Our Shelves Now at:
This lyrical tale, written in simple free verse, tells how a game with roots in ancient China --- called elastic skip in this story --- helps a boy find his footing on his first day at a new school. It is David's first day at his brand-new school. He doesn't know anyone. At recess, he stands alone and watches the other children enjoying their activities on the playground, from practicing soccer moves and climbing monkey bars to playing hopscotch and daydreaming in the grass. Bundled deep inside David's pocket is a string of rubber bands, knotted and ready for a game of elastic skip. But will anyone want to try that game? he wonders. Will anyone want to play with him?

With simple, lyrical free verse, Alan Woo echoes the singsong of schoolyard games to draw readers into the deeper levels of this lovely and poignant picture book story. Exploring the themes of friendship, diversity, belonging and inclusion, the book also celebrates David's self-acceptance and comfort with his own unique identity. With roots in ancient China, David's jump-rope game --- called elastic skip in the story, but known by many different names --- is a symbol for multicultural connections, linking David and his new schoolmates through the sharing of his background. Katty Maurey's colorful screen print-style illustrations evoke the seemingly endless space, energy, brightness and noise of recess. And through changing perspective, readers see David's evolution from a small figure lost in the crowd to a larger, central one at the story's close. This book would make an excellent choice for social studies discussions on community or cultures. It also could launch discussions on courage or individuality.
Alan Woo is an enthusiastic teen-services librarian with the Surrey Public Library. Maggie's Chopsticks, his first picture book, won the Christie Harris Illustrated Children's Literature Prize and was shortlisted for the Chocolate Lily Award. Alan's writing has appeared in Ricepaper and Quills Canadian Poetry Magazine, among other publications. Alan lives in Vancouver, British Columbia.
A gentle tale of courage and friendship.—Kirkus Reviews

A welcome, nuanced addition to the vast cannon of first-day-of-school books.—Booklist

A comforting story and a worthwhile addition to collections in need of more titles about shyness, making friends, and starting in a new place.—School Library Journal

... encourages children to be comfortable with who they are and to take the forward step of connecting with others.—CM Magazine