Roll on: Rick Hansen Wheels Around the World (Paperback) 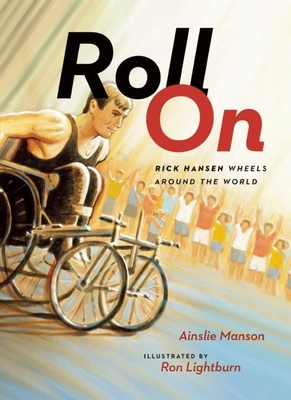 Roll on: Rick Hansen Wheels Around the World (Paperback)


On Our Shelves Now at:
As Rick Hansen wheels around the globe on his incredible Man in Motion World Tour, the children he meets are encouraged to dream their own dreams and work to make them come true. Readers also discover little-known facts about the great journey. They learn that Rick wheeled the equivalent of three marathons a day and went through 94 pairs of gloves. And they learn about the gift of a song that Rick and his team sang or hummed mile after mile. The lively text and enchanting illustrations combine to bring to life Rick's amazing feat and the impact it has had on children everywhere. Roll On is an inspirational story for any child who has had to overcome a disability, has a friend or sibling who lives with a disability, or who has big dreams for life.

Ainslie Manson is the author of ten books for children, two biographies, and two chapter books for nine- to thirteen-year-olds. She has lived, studied, and worked in Montreal, Quebec; London, England; and the United States. She now lives in West Vancouver, British Columbia. Ron Lightburn is the Governor General's Award-winning illustrator of Waiting for the Whales. His artwork has graced the covers of more than 60 books. Ron and his partner, Sandra, live in Nova Scotia's Annapolis Valley.