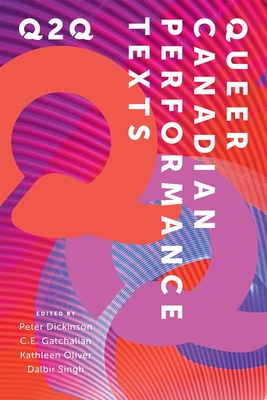 
Special Order—Subject to Availability
This anthology includes seven different plays by queer Canadian writers that provide a snapshot of Canadian contemporary queer performance practices-from play writing to drag to performance art to spoken word to digital performance. A companion title to Play wrights Canada Press's anthology Queer Canadian Theatre and Performance.
Peter Dickinson is a professor at Simon Fraser University, where he holds a joint appointment in the School for the Contemporary Arts and the Department of English. He is also Director of SFU's Institute for Performance Studies and Associate Member of the Department of Gender, Sexuality and Women's Studies. A long-time board member and Past President of the PuSh International Performing Arts Festival, Peter blogs regularly about Vancouver performance. Born, raised, and based in Vancouver, Filipino-Canadian author C.E. Gatchalian writes drama, poetry, fiction, and non-fiction. His plays, which include Broken, Crossing, Claire, and Motifs & Repetitions, have appeared on stages nationally and internationally, as well as on radio and television. His latest play, Falling in Time, was a finalist for the Lambda Literary Award. He is the 2013 recipient of the prestigious Dayne Ogilvie Prize, awarded annually by The Writers' Trust of Canada to an LGBT writer of merit. Kathleen Oliver currently teaches English at Langara College and has been writing theatre reviews for the Georgia Straight for twenty years. Dalbir Singh is the associate editor of alt.theatre magazine and has published work in such journals and anthologies as Canadian Theatre Review, Critical Perspectives on Canadian Theatre in English, Red Light, and She Speaks. His plays have been performed at the Harbourfront Centre, Factory Theatre, Buddies in Bad Times Theatre, and on CBC Radio. He is currently a Ph.D. candidate in theatre at the University of Toronto.