The History of Music in Fifty Instruments (Hardcover) 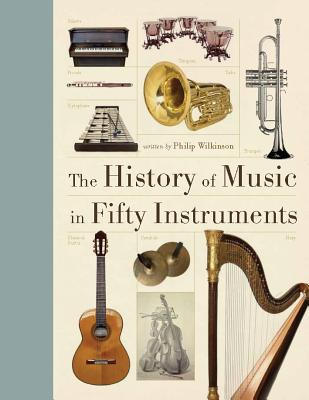 The History of Music in Fifty Instruments (Hardcover)

The 400-year story of music told by the instruments that make an orchestra.

The History of Music in 50 Instruments outlines musical history in well-written nuggets of information. Profiling one instrument at a time, it describes the history of music since the 1700s, when orchestras first took the formal shape familiar to us. The concise text explains the role of each instrument in the orchestra and its importance in the development of music in general.

The book lists the 50 instruments chronologically in the woodwind, brass, percussion and string sections of an orchestra. The classic instruments are included -- violin, cello, flute, oboe, clarinet, harp and more. Some instruments reflect the musical period or context in which they were most popular, such as the harpsichord in the Baroque period, and the snare drum in military parades. Among the unusual instruments is the otherworldly theremin.

A wide range of modern and archival photographs and paintings show the instruments. Entries outline their historical and country origins and the era in which they were played (e.g. Classical, Modern). Annotated illustrations explain the instrument's construction, how it is played and tuned, and its musical range. Composers, musical compositions and musicians that highlight the particular instrument are examined. For example, Baroque composer Antonio Vivalidi's contribution to the violin; inventor Adolphe Sax's tenacious promotion of his saxophone in the 1840s; and 20th century pianist Glenn Gould's controversial recordings of Bach's Goldberg Variations.

For musicians, teachers and students, and all who enjoy music, this book is a beautiful and informative tour of the orchestra and beyond.

Philip Wilkinson is a freelance writer and an author in a range of subject areas, particularly history, architecture and music. He has an honors degree in English and has held editorial posts at a number of publishers. His achievements include the award-winning book, Amazing Buildings, What the Romans Did for Us, and several TV tie-ins, including three for the BBC's major series, Restoration.