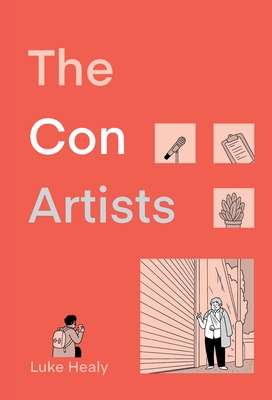 This is going to be Frank’s year. He’s going to do it all: find love, become a famous comedian, and responsibly parent his plants. But then, Giorgio gets hit by a bus.

Self-assured and utterly entitled, Giorgio has always seemed like “Frank, but better.” Moving in with and caring for his estranged childhood friend quickly starts to chip away at Frank’s sense of self, as well as Giogio’s carefully curated online persona. Is Giorgio’s penchant for overindulgence truly aspirational? Or is it ultimately a red flag? The further Frank is pulled into Giorgio’s orbit, the quicker his existential dread blooms. Expectation and reality soon collide in a singular tale about trust and confidence.

Luke Healy’s playful, hilarious third graphic novel uses crisp lines and physical comedy to portray an uneasy friendship between two young men on the cusp of adulting. Snippets from Frank’s middling stand-up routines are punctuated by the subtle farce of Healy’s mise-en-scène and the lively, at times scathingly pointed, banter of old friends. The Con Artists is a stylish character study that asks the question of who fools who once everyone is off-camera.

“Luke Healy is a master at creating genuine characters with stories that never fail to pull me in and keep me there.”—Noah Van Sciver, Fante Bukowski

“Healy is one of the finest cartoonists working today.”—James Sturm, Off Season

"A beautifully observed masterpiece... The Con Artists by Luke Healy is my favourite graphic novel of the year so far, and to be honest, it might just be among my favourite comics ever."—Rachel Cooke, The Guardian

"This graphic novel [presents an] ... introspective journey, especially as it relates to ... anxiety and guilt."—Booklist

"A mordantly funny cautionary tale, and an incisive look at the boundaries of self-presentation and self-preservation."—Publishers Weekly

“Healy’s pilgrimage through America is also a journey into his own mind, soundtracked by blistered footsteps and breathless huffs, and told with winning honesty.”—The Guardian, Best Comics and Graphic Novels of 2019