The Peanutbutter Sisters and Other American Stories (Paperback) 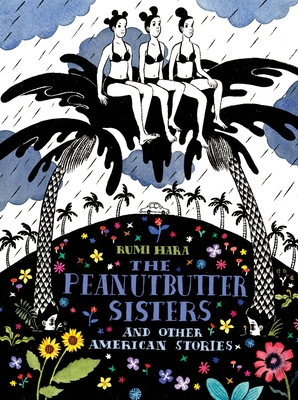 The Peanutbutter Sisters and Other American Stories (Paperback)

Rarely does a new talent arrive in the medium as unmistakably distinct as Rumi Hara. With immersive art and a clear-eyed storytelling rhythm, her uncategorizable debut, Nori, put her playful cartooning on display. Her new collection, The Peanutbutter Sisters and Other American Stories, delights with equal mischievousness.

The Peanutbutter Sisters is a glorious balance of contradictions, at once escapism and realism, science fiction and slice of life. Two students explore the urban landscape while following Newton Creek, the polluted Queens-Brooklyn border. As they do, they plan a traditional Japanese play with contemporary pop culture. Another story features an intergalactic race of all living things set in the year 2099 and is a dazzling treatise on the environment and journalism. Yet sometimes the fantastical collides with the quotidian in the same story. A man struggling with vertigo during quarantine encounters a world of sexual revelry whenever he has a dizzy spell. The Peanut Butter sisters ride a hurricane into New York City and yet aren’t able to hitch a ride back with a whale due to a heavily polluted ocean.

Hara’s magical realist tendencies and diverse cast of characters all contort the tropes of the American comics canon. Yet above all else, her innate control of the comics language—her ability to weave the absurd with the real on such a charming and commanding level—is refreshingly unrivaled.

Rumi Hara was born in Kyoto, Japan, and started printing her comics on a tiny home printer while working as a translator in Tokyo in 2010. After receiving an MFA in illustration from Savannah College of Art and Design, Rumi moved to New York in 2014, where she now lives and works as an illustrator and comics artist. Her comics series Nori was first self-published as minicomics and was nominated for an Ignatz Award in 2018.

"Rumi Hara's The Peanutbutter Sisters is a celebration of the power, imagination, and ingenuity of women, expressed as a fever dream. In one story, two girls face off in a bubble gum-chewing contest and blow bubbles so big that they consume them; in another, a goddess merely needs to point to trigger a swarm of 'Bombadonnas' to create destruction and chaos. The short stories are punctuated by surreal imagery of the Builders at work at a lumberyard, dressed in matching crotchless suits made of fur. Reading it feels like you're going on a psychedelic trip with Hara, and she's taking you by the hand deeper and deeper into her beautiful, magical, fantastical world." — Malaka Gharib, author of I Was Their American Dream and the forthcoming graphic memoir, It Won't Always Be Like This

"Striking stories that are precious but not polite, mysterious but inviting, untethered to reality but also the realest thing you could read." — Lisa Hanawalt, author of I Want You

"What a pleasure it is to lose oneself in Rumi Hara's world—one both familiar yet strange—with so many delicious details that you'll never want to leave. A delight!" — Sarah Glidden, author of Rolling Blackouts