Year of the Rabbit (Paperback) 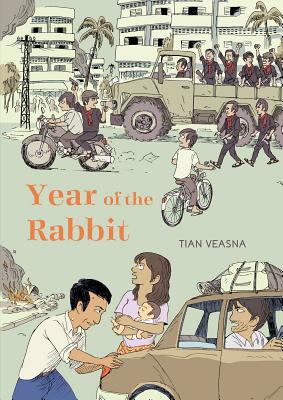 Year of the Rabbit (Paperback)

"Striking and moving... The comics form allows readers [to] understand through chronological progression and a close view how horror can become the stuff of the everyday."—The New York Times

Year of the Rabbit tells the true story of one family’s desperate struggle to survive the murderous reign of the Khmer Rouge in Cambodia. In 1975, the Khmer Rouge seized power in the capital city of Phnom Penh. Immediately after declaring victory in the war, they set about evacuating the country’s major cities with the brutal ruthlessness and disregard for humanity that characterized the regime ultimately responsible for the deaths of one million citizens.

Cartoonist Tian Veasna was born just three days after the Khmer Rouge takeover, as his family set forth on the chaotic mass exodus from Phnom Penh. Year of the Rabbit is based on firsthand accounts, all told from the perspective of his parents and other close relatives. Stripped of any money or material possessions, Veasna’s family found themselves exiled to the barren countryside along with thousands of others, where food was scarce and brutal violence a constant threat.

Year of the Rabbit shows the reality of life in the work camps, where Veasna’s family bartered for goods, where children were instructed to spy on their parents, and where reading was proof positive of being a class traitor. Constantly on the edge of annihilation, they realized there was only one choice—they had to escape Cambodia and become refugees. Veasna has created a harrowing, deeply personal account of one of the twentieth century’s greatest tragedies.

Tian Veasna was born in Cambodia in 1975, three days after the Khmer Rouge came to power. He moved to France with his parents in 1980, where he graduated from Strasbourg’s École des Arts Décoratifs in 2001. After that he returned to Cambodia for the first time, offering drawing classes as part of a United Nations humanitarian project. Since then Veasna has worked in publishing, taught visual art, and cofounded the workshop and gallery space Le Bocal, which specializes in illustration and graphic art. Veasna’s desire to recount what his family lived through in 1975 led him to return to Cambodia frequently and record the memories of his family members. Those stories became Year of the Rabbit, his first book. Veasna lives in France.

"At once stark and vivid, Year of the Rabbit is a stupendous achievement, comparable to Agnieszka Holland’s Europa Europa and Art Spiegelman’s Maus."—NPR Best of 2020

“A sense of dread pervades almost every panel.”—Phnom Penh Post

“Tian shows how horror can become everyday… [Year of the Rabbit] vibrates with a thousand details that show the dogmatic absurdity of the executioners and the hope that can still survive in victims on the edge of the abyss.”—Telerama

"Written and drawn with documentary precision, but also great sensitivity and tenderness. A triumph."—Le Figaro

"Tian Veasna’s brilliant and powerful book about the murderous reign of the Khmer Rouge in Cambodia, and the experiences of his family under the regime [makes] easy work of complex political history. But it’s also exquisitely spare. Sometimes, there is nothing to be said; no words are adequate." —Rachel Cooke, The Guardian

"Tian Veasna’s Year of the Rabbit documents in granular detail the society’s quick descent into terror... the beauty of the drawings a counterpoint to the depicted misery, with those interned there working back- and spirit-breaking hours at manual labour, while beloved relatives and friends disappear, never to be seen again. Against this hellish background, again, there are small bits of luck and minor kindnesses that stand out all the more starkly."
—The Globe & Mail

"Year of the Rabbit movingly depicts the rising terror of the Khmer Rouge years... Veasna’s energetic, loose lines are perfectly suited to capturing the nuances of the chaos and confusion." —The Times Literary Supplement