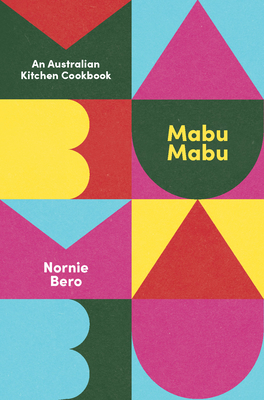 
On Our Shelves Now at:
In Mabu Mabu, charismatic First Nations chef Nornie Bero champions the tastes of native flavors in everyday cooking by unlocking the secrets of Australian herbs, spices, vegetables and fruits.

Nornie grew up on the island of Mer in the Torres Strait and while her wanderlust would take her to Italian and Japanese kitchens in Melbourne and London via Townsville, her home now is Mabu Mabu, a restaurant renowned in Melbourne and beyond for its innovative and delicious Australian Indigenous food.

This book, also called Mabu Mabu – which means help yourself – reflects Nornie's approach to cooking: simple, accessible, delicious, and colorful! Her native pantry (explored in a comprehensive glossary of native ingredients) includes seeds, succulents, nuts, plants and herbs, and her recipes range from Pumpkin and Wattleseed dampers (for which she is known) to Kangaroo Tail Bourguignon to Saltbush Butter, Quandong Relish, Pickled Karkalla and Pulled Wild Boar.

Nornie also shares her knowledge of foraging, sourcing and substitutions, as well as the story of her formative years foraging, fishing and cooking alongside her beloved father on Mer.
Nornie Bero is a chef and business owner of Mabu Mabu, in the inner western suburb of Yarraville, Melbourne. Originally from Mer Island in the Torres Strait, Nornie has been a professional chef for more than 20 years, working in Melbourne and London. Her style of cooking is all about generosity and flavor. She has been creating dishes using native ingredients for much of her career. She is on a mission to banish the idea of Indigenous herbs, spices, vegetables and fruits as a novelty and instead wants to educate people about how they can be part of every cook's pantry.

"As a member of the Komet tribe, one of eight Aboriginal tribes on the small Torres Strait Island in Queensland, Australia, Bero grew up with a deep appreciation for Indigenous culinary traditions." - Diana Hubbell, Gastro Obscura

Mabu Mabu’s overall mission is to make Indigenous food and Australian native ingredients accessible. More than that, Bero wants to change people’s perspectives and set an example for kids who grew up like her." - Katie Olsen, Cool Hunting?

"Mabu Mabu’s overall mission is to make Indigenous food and Australian native ingredients accessible. More than that, Bero wants to change people’s perspectives and set an example for kids who grew up like her." -Katie Olsen, Cool Hunting

"Ultimately the book is about more than just cooking, it’s about how food is a vehicle for connection." -Cool Hunting

"It’s a sunny and colorful cookbook that preserves the flavors of a Native Australian community for generations to come." -Alex Beggs, Bon Appetit