The Chicken Soup Manifesto: Recipes from around the world (Hardcover) 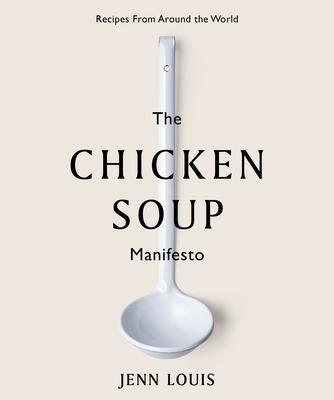 The Chicken Soup Manifesto: Recipes from around the world (Hardcover)

Longlisted for the André Simon Food and Drink Book Awards 2020

This is a celebration of one of the most widely interpreted, and beloved dishes the world over. With more than 100 recipes dedicated to this one special, often humble, meal, James Beard-nominee Jenn Louis shows readers how chicken soup is not only a source of heart-warming sustenance, but also a cure-all and the ultimate expression of love.

With chapters broken down by region and country, The Chicken Soup Manifesto includes everything from Algerian Chorba Bayda, Colombian and Panamanian Sancocho and Thai Kao Tom Gai to Spanish Sopa de Picadillo. Along with the recipes, Jenn also covers essential chicken know-how, from selecting and storing, to stock 101 and brining. The book is fully photographed with a design that establishes it as a collectible object as much as a hard-working guide to the world's favorite soup.
Jenn Louis has enjoyed a culinary career spanning more than two decades. She has owned several highly acclaimed Portland restaurants as well as a wildly successful full-service catering company. Jenn has competed on Bravo's Top Chef Masters, was named one of Food & Wine's Best New Chefs in 2012, and her simple, sophisticated cooking style, championing seasonal Pacific Northwest US ingredients, has earned her two nominations for the James Beard Foundation Award of Best Chef: Northwest. Her debut cookbook, Pasta By Hand, published in 2015, was nominated for an IACP International Association of Culinary Professionals award. Her second book, The Book Of Greens, won an IACP award in 2017.