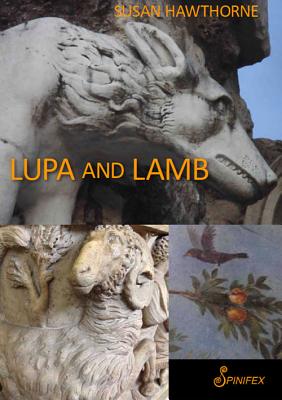 This collection of imagist poems combines mythology, archaeology, and translation. Susan Hawthorne draws on the history and prehistory of Rome and its neighbors to explore how the past is remembered. Under the guidance of Curatrix, Director of the Musæum Matricum, and Latin poet, Sulpicia, travelers Diana and Agnese are led through the mythic archives about wolves and sheep before attending an epoch-breaking party to which they are invited by Empress Livia. An enticing tapestry of real and imaginary texts that gladden the readers’ hearts, Lupa and Lamb is poet Susan Hawthorne at her best.

Susan Hawthorne is a poet, a novelist, an adjunct professor in the writing program at James Cook University, and the cofounder and director of Spinifex Press. She is the author of eight collections of poetry. Her poetry collection Cow was short-listed for the Kenneth Slessor Poetry Prize in the 2012 NSW Premier’s Literary Awards and was also a finalist in the 2012 Publishing Triangle Awards for the Audre Lorde Lesbian Poetry Prize in the United States. Earth’s Breath was short-listed for the 2010 Judith Wright Poetry Prize. Her work has appeared in annual Best Australian Poems anthologies, been broadcast on National Radio, and published around the world in literary journals and anthologies. In 2013, she was the BR Whiting Library Resident in Rome funded by the Australia Council.

“Combining erudition with emotion and eroticism, intellect with imagination, Susan Hawthorne weaves women’s forgotten history into a magic web of remembering and re-imagining. With her playful juxtapositions of words, names, times, places and species, she shows there is freedom in not forgetting, and that the world could have been—can be—different.”  —Robyn Arianrhod, author, Seduced by Logic

“Reading Lupa and Lamb is not like opening Pandora’s box. The treasures released: poetry that redeems the voices and torn whispers of millennia of women, give only delight. Playful Curatrix eases us through ancient languages, myths and the intricate details of love and lust. Always we are reminded that poiesis is fabrication, creation and re-making; this is how the past can be found and reworked into divine gifts.”  —Lyn Hatherly, author, Acts of Abrasion

“Inspired by her residency at the Whiting Studio in Rome, Susan Hawthorne’s Lupa and Lamb explores the mysteries of ancient sites and treasures in Rome and nearby countries, linking the past with the present, and collecting hidden treasures the archaeologists have missed. Poems, plays, and ‘lost texts’ of women through the ages are presented in words and imagery that offer sensual and intellectual delights. This is ‘translation’ in its widest sense—a collection to be treasured and reread.”  —Elaine Lewis, author, Left Bank Waltz