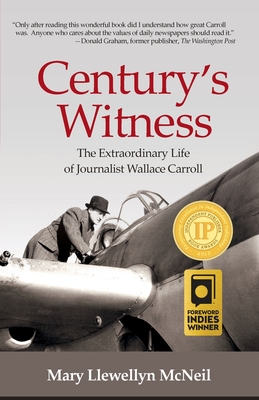 "With crisp prose, fine research, and a clear moral purpose, Mary McNeil shines a light on Wallace Carroll and in so doing, powerfully illuminates the current troubles of journalism..."

"This well-told story of a gentleman journalist is a trip back in time to when that phrase did not strike most American as an oxymoron, and when vibrant local newspapers were both causes and effects of national vigor."

"This book is the discovery of a remarkable but underusing life, a well-researched and captivating read..."

Today when local newspapers are going out of business, corporate profits drive press coverage, and unbiased reporting is seen as almost nonexistent, Wallace Carroll's life is a lesson in excellence. A "journalist's journalist" with unmatched integrity, Carroll covered the most significant events of his time, from the London Blitz to the United States' withdrawal from the Vietnam War. His story is even more relevant today given the war in Ukraine and Russia's assault on the truth. Carroll covered the League of Nations in the 1930s, warning the American public of the dangers of fascism, headed United Press's office in London at the outbreak of the war and was among the first journalists to reach the Russian front following the Nazi invasion of the Soviet Union in 1941. He later joined the US Office of War Information, tasked with "winning the hearts and minds" of those under the Nazi boot. As such, he was well-placed to understand the power of words, and their heightened importance in a time of war.

Carroll's life and career are essential reading for all those who believe a trusted and reasoned press is essential to our democracy. Carroll bore witness to this country's greatest generation-working to win a war, influence the peace, abolish segregation in the South, and conserve our most beautiful lands-these were the accomplishments of his life.

In the early afternoon of Saturday, September 7, 1940, Hermann Goering, commander in chief of the German Luftwaffe, climbed the cliffs of Cap Gris-Nez in northern France to watch more than 800 German bombers and fighters set off for the English coast. Flying in perfect formation, they formed a block 20 miles wide, their silver wings glistening in the blue skies of a warm day. British spotters on the coast marked their arrival, assuming they would disperse to attack the airfields and sector stations they usually targeted.

That same day journalist Wallace Carroll, eager to take advantage of the beautiful weather, was sunning himself on the upper tower of the United Press (UP) offices on Bouverie Street, off Fleet Street in London. Despite his initial hurry to set up a telephone line to the desk below to call in any action, the tower had sat empty for almost a year. Occasionally one of his reporters would venture up to get a glance at the city or, as Carroll did that day, to sun himself in the late summer air.

But for several days now Carroll had posted himself on a small chair near the tower's edge. He had a distinct feeling that something might be afoot. His numerous sources in British intelligence had told him that landing barges in the estuaries of the Netherlands and France were on the move to the coast, and he knew-after visiting the Royal Air Force (RAF), seeing German pilots in action, and haunting the halls of RAF Command-that both countries'