Bourgeois To Buddha: My Trials and Errors Across Four Continents (Paperback) 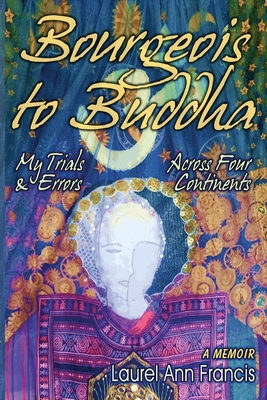 Bourgeois To Buddha: My Trials and Errors Across Four Continents (Paperback)

BOURGEOIS TO BUDDHA is a tale of one woman's mid-life inferno after her nest empties and how she exits her standard American home, husband and career to explore both intimacy and super-consciousness.

The author invites even the most dubious reader along on her leaping, trudging and wandering quest for solace and enlightenment somewhere, somehow, amidst a plethora of wellness practices and Eastern spiritual studies. Willing to believe in guidance to "give up what you've got for what's waiting for you," her gutsy, more trusting, somewhat desperate self did it on limited resources.

Laurel Ann Francis might have called her memoir HOMELESS BY CHOICE The Way, My Way @$10 A Day as she writes about her sabbatical of exploits in New Age Centers across America at Kripalu, the Omega Institute, Esalen, The Lama Foundation, Tassajara Zen Center, and Harbin Hot Springs. With a one-way ticket to India, she begins a guru shopping trip to find God (or get Him/Her/It to find her), searching at ashrams from the Himalayas to Pondicherry, signing in the Osho Commune International, and sitting at Vipassana retreats in Nepal, Thailand, and Sri Lanka.

By 1995, her fifth year on the path, she is celibate for spiritual reasons, but still conflicted by duality and polarity. She feels motivated to join engaged Buddhists in Auschwitz, Poland, to undertake The International Interfaith Pilgrimage for Peace and Light, a 9-month journey, crossing 17 countries and 10,000 miles (including 2,000 on foot) to commemorate the 50th Anniversary of the End of WWII in Hiroshima, Japan.

Wiser after a decade-long, four-act play of opposites, with a wry awareness of human foibles and her own shortcomings, the author returns to family revisited and reconfigured on an unfamiliar Hawaiian island, displaying a tenderness suffused with a richer understanding of both herself and the world.

Laurel Ann's Trials and Errors Across Four Continents reflect the spunky, sparkly style of a woman who learns there are no errors. She makes fun of herself even as she seeks and sneaks up on enlightenment.