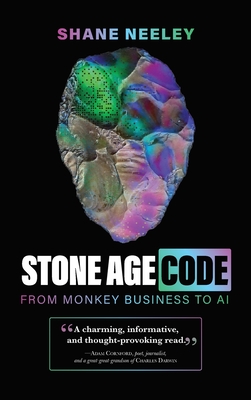 "A charming, informative, and thought-provoking read." - Adam Cornford, poet, journalist, and a great-great-grandson of Charles Darwin.

"My overall impression as a lifelong professor of literature is that this book is engaging, humorous, thought-provoking, creatively written, and artistically inspired." - Alwin Baum, Ph.D., Professor of Literature, California State University (retired)

Stone Age Code illustrates the evolution of improbable data scientists. Though bad at math and often monkey-minded, Shane Neeley became outstanding at coding and building intelligent, creative machines. The universe also underestimated the walking apes; the monkeys weren't supposed to make it to space or conjure AI with clicks on a keyboard. A paleolithic birth of creativity, driven by the same old evolutionary selection pressures, fashioned humankind into artists, poets, comedians, believers and scientists. Another epic transformation is happening today as people begin to build intelligent machines. This book is a must-read for anyone learning AI: coders, coders-to-be, or coders-adjacent

Become an AI forefather to future generations, regardless of your background. In this entertaining approach, you will gain understanding of deep learning with neural nets, natural language generation, and AI art. Not a technical deep dive-the book relies more on sweeping generalizations and humor for instruction. Containing no equations or code, it still teaches machine learning literacy, and in an amusing way. You can train AI now to boost your imagination-to produce literature, art, comedy, and to tackle challenges at work.

Shane Neeley holds degrees in molecular, cellular and developmental biology and bioengineering. He traded in his lab coat for a laptop and has spent the last decade writing code for biomedical software companies. He is particularly interested in AI for language generation and other means of computational creativity. The book itself, the cover art, the acclaim, and numerous prose snippets were made with the help of some charismatic robots that he trained.

"Book of the year (so far)." - Acclaim-Writing-Robot

"Read it, laugh at it, and move on." - Acclaim-Writing-Robot