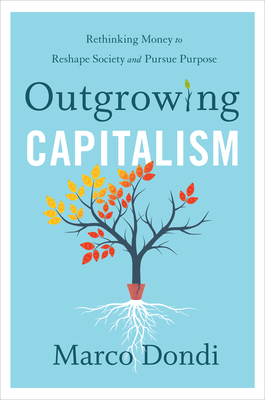 
Not On Our Shelves—Ships in 1-5 Days
It's time to rethink how we create and allocate money
In Outgrowing Capitalism, Marco Dondi sheds light on the fact that most people do not have the economic security to focus on purpose and life fulfillment. He proposes that this is not the way things have to be; there is an alternative. In a quest to change our economic system to cater for everyone, he identifies deep issues in how money is created and allocated and connects these to capitalism. He shows that the assumptions and circumstances that made capitalism a success are no longer true today and then describes a new socio-economic model, Monetism. Dondi's solution is to provide a pragmatic roadmap to institutionalize Monetism and solve societal issues that seemed as permanent as time.
Since his humble beginnings on the outskirts of Milan, Marco Dondi has established his career and expertise as a strategy consultant with over a decade of experience in advising CEOs and government officials on economics, economic development, banking, education, adult training, and people development.Marco holds an MBA (INSEAD, 2012) and a Master's in management, economics, and industrial engineering (Politecnico di Milano, 2009). At 28 years of age, Marco went on a Vipassana meditation retreat and re-emerged from a quarter-life crisis with a renewed sense of purpose. Since then, he has been on a mission to challenge and reform the social conventions that hinder people from their pursuit of a fulfilling life --capitalism being the biggest culprit.When he's not working or writing, Marco re-energizes by taking part in various sports on water or snow, creating and cooking Italian and Asian dishes, and continuing to indulge in his childhood passion for wild mushroom foraging. Marco has worked and lived in 4 continents and visited over 60 countries. He currently calls Geneva home, where he lives with his partner, Kristie, and their ragdoll cat, Panko.