From WHITE to BLACK: One Life Between Two Worlds (Paperback) 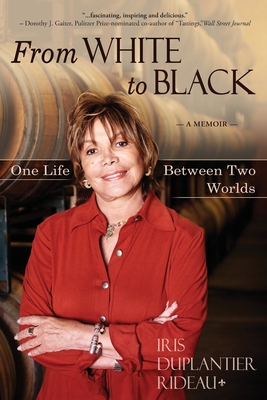 From WHITE to BLACK: One Life Between Two Worlds (Paperback)

Iris Duplantier Rideau's story is one of rags to riches-of accomplishing the nearly impossible by a Black woman born into a poor Creole family in New Orleans. Stung by the ugly hatred of racism around her, Iris learned how to "pass for white" at an early age.

Surviving horrifying and humiliating events that would have stopped most people only made Iris more and more determined to succeed. Not content to stay in her low-paying job in a sewing factory, Iris took night classes to further her education. She eventually landed a front office job with an insurance agency that didn't care about her skin color or the blood that ran through her veins, only that she was a fast typist

After the Watts riots, Iris founded her own insurance agency, providing insurance to thousands of ineligible homeowners, Black-owned businesses, and non-profit agencies such as the Urban League that "white" insurance companies wouldn't touch. Her success caught the eye of the then-mayor of Los Angeles, Tom Bradley, who brought her on to insure the city's Federal programs and manage its supplemental pension fund. Iris successfully ran her insurance company and securities firm for the next thirty years-the first Black woman on the West Coast to have such responsibility and success.

When Iris retired, she built a home in the Santa Ynez Valley. But opportunity knocked again, and she created Rideau Winery. She introduced her Creole heritage-and famous authentic cooking to the Valley, pairing her signature dishes with her award-winning wines. Iris knew her winery would have to be the best-and it was-garnering multiple awards and accolades and bringing thousands of guests from all races and walks of life together as friends.

In 2016, Iris sold her winery and took on another challenge-writing her memoir From WHITE to BLACK about her remarkable life moving between two worlds. Photos and recipes included.