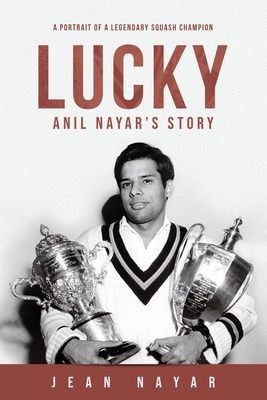 In London in 1965, Anil Nayar made history by becoming the first Indian to gain world champion status in his sport when he captured the Drysdale Cup, the prize awarded to the winner of the event then regarded as the world championship tournament for juniors in squash. This newly released biographical memoir on his life and sports career written by Jean Nayar, the star player's wife, traces Nayar's groundbreaking journey from Punjab to Cambridge to Bombay to New York City over the course of his four-decades-long career, which brimmed with accolades and champion titles around the globe.

It's a sports story, of course, with squash as its centerpiece and fame and honors while playing as a champion at Harvard and around the world as its crowning glory. Beyond sports, however, it's a chronicle of a cross-cultural experience through the lens of the pioneering player as he charted a course through an elite sport and built bridges among people of different cultures and classes. It's also a tale of a man from the Land of Five Rivers uniting with a woman from the Land of 10,000 Lakes to share memories of an exhilarating adventure filled with frictions, tensions, accomplishments, and joys. Widely recognized as India's greatest squash player, Nayar's unlikely story begins in the environs of Bombay's glittering Queen's Necklace, where his family moved to escape the hostilities near the newly minted border between Pakistan and India in the wake of partition when he was just a baby. As a roly-poly child, few would have guessed that the plump and insecure youngster would emerge as a world-class sportsman. But the proximity of his family's home to the renowned Cricket Club of India all but sealed his fate as he strove to shed his excess weight and adolescent anxieties. Laced with the memories of dozens of top players, coaches, family members, and friends, this engaging tale not only provides a valuable record of the role Nayar played in the history of squash but also highlights an ongoing intercultural exchange between India and America that was fostered in part by this pioneering player. It illustrates, too, the champion sportsman's continuing commitment to uplift India's poorest children through sport. Nayar's journey also exemplifies how a person born into a context of hatred and division can choose instead to become a unifier through generosity and high-minded sportsmanship, and this inspiring biography on his life and sports career offers a refreshing counterpoint to today's trends towards regressive nationalism and identity-based hostility in our complex global arena. It is sure to be a refreshing read for sports fans and culture buffs alike.