Floating Feathers: A Doctor's Harrowing Experience as a Patient Within Conventional Medicine --- and an Impassioned Call for the Future o (Paperback) 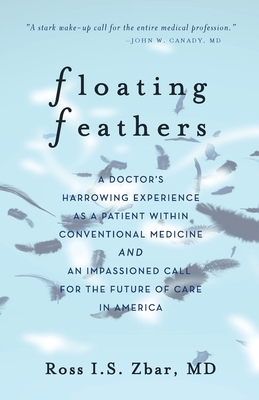 Floating Feathers: A Doctor's Harrowing Experience as a Patient Within Conventional Medicine --- and an Impassioned Call for the Future o (Paperback)

Dr. Ross I.S. Zbar spent his career as a plastic surgeon, in the US as well as abroad in developing countries, mending disease- and trauma-related deformities--and he was never hesitant to make his voice heard as an advocate for better patient care.

Then, on a warm December day in 2018, Ross suffered a trauma that nearly took his life, putting him into the hands of his profession in a way he never anticipated. While his life was ultimately saved, his journey to wellness within the conventional medical establishment--from three weeks in the ICU to in-patient rehab--was nothing short of nightmarish. Frequently sedated and physically restrained, he was inundated with mental, emotional, and sensory evidence of an industry gone haywire, experiencing clearly from the patient side what he had only touched on as an advocate.

Vowing to be an even stronger voice for change, Ross used the power of his mind to recover faster than any of his doctors predicted. Floating Feathers not only recounts his compelling story but elucidates a thoughtful and authoritative critical call to the members of his beloved profession for a massive overhaul.

"We possess the technology and the brilliant minds to motivate this level of sweeping change so desperately required," he says. "We simply need to champion it as a non-negotiable priority."

This profoundly personal yet wide-reaching book endeavors to be a vital first step toward that goal.