The Sting of Victory: A Dark Lesbian Fantasy Romance (Paperback) 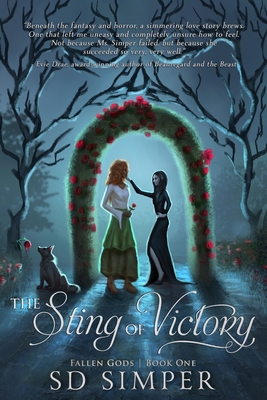 The Sting of Victory: A Dark Lesbian Fantasy Romance (Paperback)

"Simper has created a brilliant combination of gruesomely dark fantasy and scorching romance. The protagonists are both so flawed, you are at once drawn to and repelled by them. Simper takes the idea of grey morality and writes it to perfection."

When Flowridia, a witch granted power by an unknown demon, deceives an alluring foreign diplomat, she is promoted to a position of power to conceal her falsehood. Thrust into a world of politics and murderous ambition, she has her gentle heart and her Familiar to guide her - as well as a drunk Celestial with a penchant for illusion.

Meanwhile, Lady Ayla Darkleaf, Grand Diplomat of Nox'Kartha, smiles with predatory charm and wields her blades with a dancer's grace. Flowridia falls into a toxic love affair, one she knows will end in heartbreak. But as Ayla's legacy as a vampiric creature unfolds, Flowridia begins to see the broken woman behind the monster.

When a foreign emperor dies at the hands of a mysterious interloper, one who seeks to collect the greatest sources of power in the realms, Flowridia's kingdom is charged to stop him. But Flowridia's devotion is torn between duty to her own and the woman whose claws grip her heart.

In the ensuing clash of Gods, Flowridia must choose her loyalties with care - the fates of kingdoms rest in her hands.