How Computers Really Work: A Hands-On Guide to the Inner Workings of the Machine (Paperback) 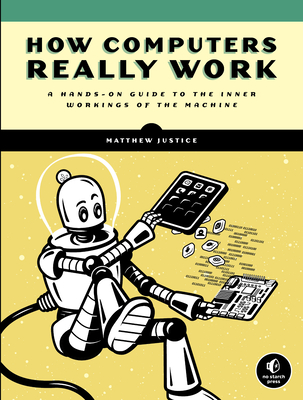 How Computers Really Work: A Hands-On Guide to the Inner Workings of the Machine (Paperback)


Not On Our Shelves—Ships in 1-5 Days
An approachable, hands-on guide to understanding how computers work, from low-level circuits to high-level code.

How Computers Really Work is a hands-on guide to the computing ecosystem: everything from circuits to memory and clock signals, machine code, programming languages, operating systems, and the internet.

But you won't just read about these concepts, you'll test your knowledge with exercises, and practice what you learn with 41 optional hands-on projects. Build digital circuits, craft a guessing game, convert decimal numbers to binary, examine virtual memory usage, run your own web server, and more.

The book's projects will have you translate your learning into action, as you:

And since a picture is worth a thousand bytes, chapters are filled with detailed diagrams and illustrations to help clarify technical complexities.

Requirements: The projects require a variety of hardware - electronics projects need a breadboard, power supply, and various circuit components; software projects are performed on a Raspberry Pi. Appendix B contains a complete list. Even if you skip the projects, the book's major concepts are clearly presented in the main text.
Matthew Justice, a software engineer, spent 17 years at Microsoft where his work included debugging the Windows kernel, developing automated fixes, and leading a team of engineers building diagnostic tools and services. He has worked on everything from low-level software to high-level web applications.
"Much more understandable than most books of this type, even when the author delves deeply into machine code, programming languages, operating systems and the internet. He details 41 hands-on projects, including games, running a web server, and so on. It's just right for the would-be software engineer."
—Joy Schwabach, Arkansas Democrat Gazette's On Computers