Nothing Is Wrong and Here Is Why: Essays (Compact Disc) 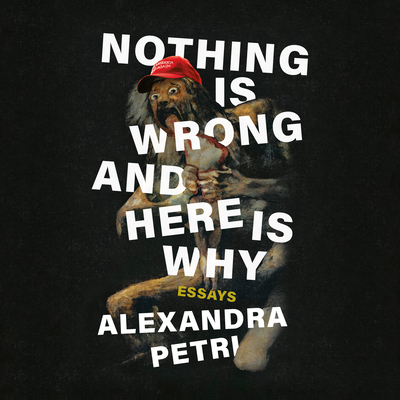 Nothing Is Wrong and Here Is Why: Essays (Compact Disc)


Special Order—Subject to Availability
These impossibly cheerful essays on the routine horrors of the present era explain everything from the resurgence of measles to the fiasco of the presidency. In Nothing Is Wrong and Here Is Why, acclaimed satirist Alexandra Petri offers perfectly logical, reassuring reasons for everything that has happened in recent American politics that will in no way unsettle your worldview. In essays both new and adapted from her viral Washington Post columns, Petri reports that the Trump administration is as competent as it is uncorrupted, white supremacy has never been less rampant, and men have been silenced for too long. The woman card is a powerful card to play Q-Anon makes perfect sense This Panglossian venture into our swampy present offers a virtuosic first draft of history-a parody as surreal and deranged as the Trump administration itself. Written with devastating wit that reveals a persistent, perhaps manic optimism about her benighted country, Petri's essays have become iconic expressions of rage and anger, read and liked and shared by hundreds of thousands of people. Nothing Is Wrong and Here Is Why shows why she has emerged as the preeminent political satirist of her generation.