No Apologies: Why Civilization Depends on the Strength of Men (Hardcover) 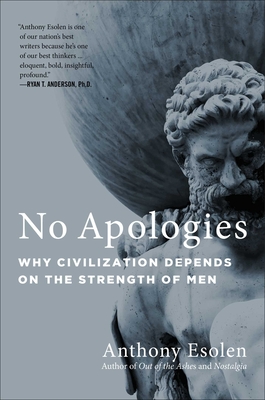 No Apologies: Why Civilization Depends on the Strength of Men (Hardcover)


Not On Our Shelves—Ships in 1-5 Days
No more apologies for being a man! Best-selling social commentator Anthony Esolen draws on timeless wisdom to defend the masculine virtues of strength, drive, ambition, and determination in building and upholding civilization itself.

This is a book that should not have to be written. Its purpose is to return to men a sense of their worth as men and to give to boys the noble aim of manliness, an aim which is their due by right.

One of the most courageous and penetrating writers of our time, Anthony Esolen shows that men and women would both be happier if men came to a just appraisal of their worth. The manhood he praises does not boast or swagger, but it appreciates its powers. It is reluctant to hurt, but it does not cringe or cower.

The whole of civilization rests on the shoulders of men who have done work that most people would not do—and that the physically weaker sex could not have done. And though the masculine mystique is about more than physical force, the differences between the sexes—manifold and profound—are all related in some way to that one, the easiest difference to see and the hardest to deny.

The feminist who mindlessly asserts that “a woman needs a man like a fish needs a bicycle” takes her comfortable world—including the bicycle—for granted. And she betrays her lovelessness and ingratitude. Worse, she poisons the minds and hearts of boys with her talk of “toxic masculinity.”

No Apologies, with its compelling vision of a strong and effective manhood, reminds men that they have powers as men, and that those powers must be used for the common good, for everyone—men, women, and children all.

Anthony Esolen is the author of numerous books, including No Apologies, Nostalgia, and Out of the Ashes, and has published translations of Dante, Tasso, and Lucretius. He is Writer-in-Residence at Magdalen College of the Liberal Arts in New Hampshire.