Founders of the Future: The Science and Industry of Spanish Modernization (Campos Ibéricos: Bucknell Studies in Iberian Literatures and Cultures) (Paperback) 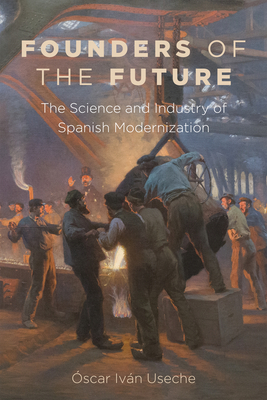 Founders of the Future: The Science and Industry of Spanish Modernization (Campos Ibéricos: Bucknell Studies in Iberian Literatures and Cultures) (Paperback)


Special Order—Subject to Availability
In this ambitious new interdisciplinary study, Useche proposes the metaphor of the social foundry to parse how industrialization informed and shaped cultural and national discourses in late nineteenth- and early twentieth-century Spain. Across a variety of texts, Spanish writers, scientists, educators, and politicians appropriated the new economies of industrial production—particularly its emphasis on the human capacity to transform reality through energy and work—to produce new conceptual frameworks that changed their vision of the future. These influences soon appeared in plans to enhance the nation’s productivity, justify systems of class stratification and labor exploitation, or suggest state organizational improvements. This fresh look at canonical writers such as Emilia Pardo Bazán, Concha Espina, Benito Pérez Galdós, Vicente Blasco Ibáñez, and José Echegaray as well as lesser known authors offers close readings of their work as it reflected the complexity of Spain’s process of modernization.


ÓSCAR IVÁN USECHE is an associate professor of Spanish at Ursinus College in Collegeville, Pennsylvania. As a specialist in modern peninsular studies, his research focuses on exploring the interaction between science, technology, and cultural production in fin-de-siglo Spain. His work has appeared in a variety of academic publications, including the Journal of Spanish Cultural Studies, Decimonónica, and Siglodiecinueve.
"Founders of the Future establishes Spain as a vital player in late nineteenth-century discussions of modernization, industrialization, and energy. With a background in engineering and a fine ear for language, Óscar Iván Useche looks beyond well-known works to show how metaphors in popular science writing shaped attitudes toward energy, industrial production, and Spain’s possibilities."
— Laura Otis

"Each chapter of this finely-crafted book paints a lucid picture of the productive incorporation of industrial language and imagery into the discursive fabric of fin-de-siglo Spanish society. Researchers, historians, and scholars from diverse disciplines and theoretical backgrounds will no doubt find Useche’s book a rich source for reflection."
— Nicolás Fernández-Medina

"At the crossroads of industry and ideology, Useche reveals the 'semiological engine' of a paradigm shift in fin-de-siglo Spain that spans the discursive horizon of modernization and progress. Attentive to economics, education, labor practices, technology, and the environment, this study explores how coetaneous, often contradictory currents of thought confronted change through new ways of imagining a symbolic advancement that was at once liberating and threatening for Spain’s tomorrow."
— Travis Landry