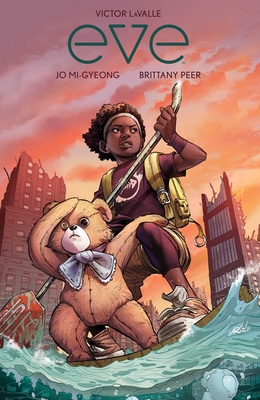 
In Stock—Click for Locations
A young girl, Eve, raised in a virtual reality embarks on a deadly cross-country quest to save her father… and our dying planet.

WHAT WORLD HAVE WE LEFT OUR CHILDREN?

When the ice caps melted, most of humanity was lost to the hidden disease that was released. Now, a mysterious girl named Eve has awoken in secret and must deal with a world that’s nothing like the virtual reality she was raised in.

In order to save her father and accompanied only by Wexler, her robotic caretaker and protector sheathed in her favorite teddy bear, Eve must embark on a deadly quest across the country. Along the way, she will have to contend not only with the threats of a very real world that await her, but the lies we tell our children in the name of protecting them.

In the spirit of his critically acclaimed and award winning novel Changling, novelist Victor LaValle (The Ballad of Black Tom, Victor LaValle’s Destroyer) and illustrator Jo Mi-Gyeong (The Dark Crystal: Age of Resistance) deliver a powerful dystopian adventure about the world we leave behind… and the price that must be paid to restore life to a dying planet.

Victor LaValle is the author of a short-story collection, Slapboxing with Jesus, four novels, The Ecstatic, Big Machine, The Devil in Silver & The Changeling, and two novellas, Lucretia and the Kroons and The Ballad of Black Tom.