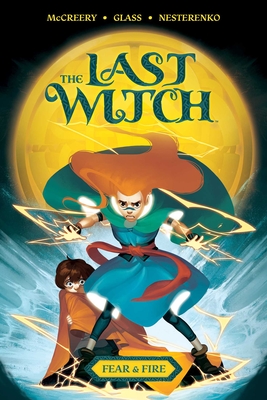 
Special Order—Subject to Availability
A new young adult fantasy trilogy about a young girl named Saoirse who must save everyone she loves by discovering the truth about the mysterious mark on her shoulder - and embracing her secret magical powers!

YOU HAVE THE POWER.

It's the one time of the year when the witch known as Cailleach hunts the children of the village - so Saoirse, a brave and reckless young girl, decides this is the perfect opportunity to defy her father and discover the secrets of the witch’s tower!

But when the Cailleach captures Saoirse and her brother Brahm, their lives are forever changed in ways they never expected.

Now, Saoirse will have to save everyone she loves by discovering the truth about the mysterious mark on her shoulder - and embracing her secret magical powers!

Conor McCreery (Adventure Time/Regular Show) and V.V. Glass (Doctor Who) kick off a new young adult fantasy trilogy that shows the greatest magic of all lies inside of us!

Collects The Last Witch #1-5.
Conor McCreery is a former journalist turned comics scribe. After receiving ONE too many death threat, he decided to move into the world of comics - and has worked for many of the industry's top publishers including DC, IDW, BOOM!, Titan, and Dark Horse. He writes about sensitive boys and kick-ass girls, although not always in that order.