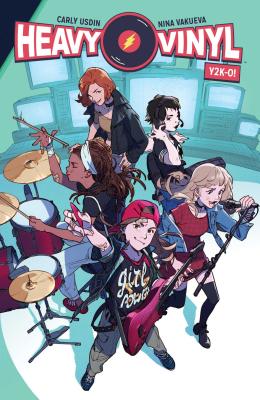 
Not On Our Shelves—Ships in 1-5 Days
An all-new original graphic novel follow up to the award-nominated Heavy Vinyl: Riot on The Radio that reunites everyone’s favorite girl vigilantes to save the day by stopping Big Music from killing digital music in 1999!

SAVE THE INTERNET, SAVE THE WORLD (OF MUSIC)!

It’s 1999 and Chris is living her dream: working at Vinyl Destination by day and fighting for (musical) justice by night (okay, maybe during the day too) in the world’s coolest teen girl vigilante fight club. But when the girls of Vinyl Destination enter a Battle of The Bands – to investigate and, of course, win – they learn that the shadowy corporate masters of the music industry plan to destroy the fledging world of digital music and blame it on Y2K. Now it’s time for Chris and the gang to dial up 56k (or more, pretty please) of justice so they can save the day once again!

The critically-acclaimed team of writer Carly Usdin (The Avant-Guards) and Russ Manning Award-nominated artist Nina Vakueva (League of Legends: Ashe) reunite for a follow-up to Heavy Vinyl: Riot on The Radio, which was recognized as one of the 2018 YALSA Great Graphic Novels for Teens.
Carly Usdin is an award-winning filmmaker based in Los Angeles. Her first feature, Suicide Kale, won the Audience Award for Best First Feature at Outfest 2016. After playing over 30 festivals worldwide the film is now available on iTunes and Amazon Prime. In 2017 Carly served as showrunner and director for the scripted series Threads, produced by New Form for Verizon’s go90 platform. The 20-episode horror and comedy anthology series brought to life outrageous stories from internet forums like Reddit. Carly is also the creator and writer of two comic book series for BOOM! Studios: Heavy Vinyl (in stores now) and The Avant-Guards (out in January 2019). Heavy Vinyl was nominated for a 2018 Prism award, honoring the best in LGBTQAI+ comics.