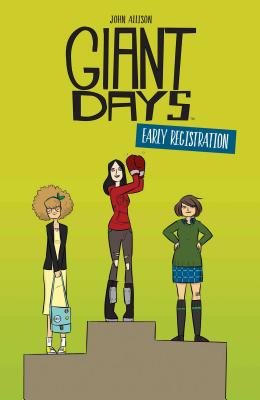 Flashback to freshman year with Esther, Susan and Daisy to see how they first met and became the best of friends, in these bonus Giant Days stories.

Take a trip through the past in these early Giant Days stories, and discover the origin of Daisy, Esther and Susan’s friendship as they embark on orientation, getting-to-know-you-exercises, and collisions with a secret society devoted to Black Metal.

Collecting the original, self-published Giant Days comics for the first time, creator John Allison (Bad Machinery, Scary Go Round) takes us back to where it all started in Giant Days: Early Registratio.
John Allison is a British comic writer and artist, known for his Eisner Award nominated series Giant Days, as well as webcomics Bobbins, Scary Go Round, and Bad Machinery.