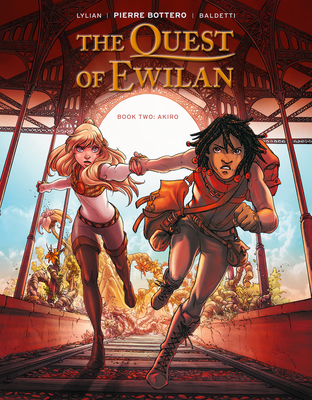 This is book number 2 in the Quest of Ewilan series.

Join 13-year-old Camille on this epic and grand fantasy as she comes to accept the fact that she's really the daughter of two powerful magicians from a parallel world.

Camille has inherited a tremendous gift--the power to imaginate, the ability to manifest things by creating a mental image of them. The battle against the evil Ts'liches has intensified and Ewilan may be the Empire's last hope. She's joined on her quest by her best friend Salim, Edwin the master of arms, the colossal Bjorn and Maniel, the old Master Duom, and their newest recruit--Ellana, the astonishing Shadowalker. Their first objective is to awaken the Sentinels, but to do that, Master Duom sends Camille back to the human world to locate the person who can best do the job--her brother Akiro! But the Ts'liches uncover her plan and send a Chaos mercenary to kill them both!

Pierre Bottero has created a startlingly coherent imaginary universe that recalls the worlds of J. R. R. Tolkein, C. S. Lewis, and Philip Pullman.
Pierre Bottero (b. 1964) grew up Provence, France, where he worked as a primary school teacher before turning to writing full time. He's best known for his Gwendalavir series, made up of four complete trilogies and an unfinished fifth. He died in 2009.

Lylian has been writing comics since 2004 and currently writes several series, both adaptations and original stories.

Laurence Baldetti was born in Nice and studied comics, illustration, and sculpture at the Emile Cohl school in Lyon. The Quest of Ewilan is her first major comics work. She has also created the two-volume Perle Blanche with Sébastien Floc'h.