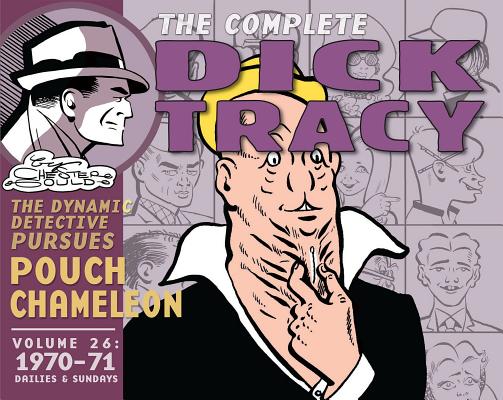 This is book number 26 in the Dick Tracy series.

The adventures of the iconic square-jawed detective fighting a menagerie of bizarre villains remains one of the highlights in the history of not just comics, but crime fiction in general.

Having returned to policing duty on Planet Earth, former Space Sheriff Tracy finds a world markedly changed from the one he left. Feeling handcuffed by expanded legal protections afforded suspects and stricter guidelines of evidence, Tracy all but begs bad guys to shoot first, and he may get his wish, thanks to nemeses such as explosion-crazed Jonny Scorn, the hand-grenade toting revolutionary called El Tigress, and the aptly-named Dope King, in a story that features Tracy's most direct assault on drug traffickers, coinciding with Richard Nixon's "War on Drugs!"

These early '70s adventures also see the dauntless detective facing off against one of the strip's best late-era grotesque villains: Pouch, who uses a repulsive hidden flap in his neck to hide anything from stolen diamonds to automatic pistols. The plot also features a rare return by an earlier villain, as the Mole is released from prison after serving nineteen years, only to learn his granddaughter, Molene, is part of Pouch's gang!

All this, plus: Tracy grows a mustache, Groovy seems to fall for a certain long-legged policewoman, and Gravel Gertie tries to figure out the mysterious link between the world's oldest tattoo artist and a million dollars in missing gems. Finally, an attempted burglary of rare metals from Diet Smith's plant introduces Peanut Butter, the smartest kid in the strip since Brilliant, the inventor of the Two-Way Wrist Radio.

Volume 26 reprints all dailies and Sundays from December 24, 1970 to September 27, 1972.
Chester Gould (1900-1985) was born in Pawnee, Oklahoma, the son of a newspaperman and grandson of a circuit-riding preacher. He attended Oklahoma A&M (now Oklahoma State University) before transferring to Northwestern University in Chicago, from which he graduated in 1923. He produced the minor comic strips Fillum Fables and The Radio Catts before striking it big with Dick Tracy in 1931. Originally titled Plainclothes Tracy, the rechristened strip became one of the most successful and lauded comic strips of all time, as well as a media and merchandising sensation. He was twice accorded the "Cartoonist of the Year" Reuben Award by his peers. Gould continued to write and illustrate Dick Tracy until his retirement in 1977.