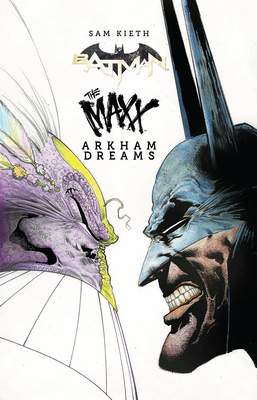 A devious new doctor at Arkham Asylum is conducting unconventional experiments into the human psyche, and he kicks off a chain reaction of disaster when he experiments on Arkham's newest patient, The Maxx! The city of Gotham is starting to merge with The Maxx's psychedelic mental landscape, known as the Outback, blurring the line between real and unreal. It's up to Batman to save not just Gotham, but all of reality, and he and The Maxx are going to have to travel through some of the darkest places imaginable--the twisted minds of Batman's greatest enemies!

Join Batman and The Maxx on an off-kilter and unforgettable romp through the diabolical consciousnesses of Batman's greatest foes, including Harley Quinn, the Penguin, Killer Croc, and, of course, the Joker. Legendary artist Sam Kieth (The Sandman, Wolverine) returns to his greatest creation, The Maxx, after two decades, and to Gotham City as well.

Collects the complete five-issue series.
Sam Kieth is an American comic book writer and illustrator, best known as the creator of The Maxx and Zero Girl. Kieth first came to prominence in 1984 as the inker of Matt Wagner's Mage, and a year later as the inker of Fish Police. In 1989, he penciled the first five issues (the "Preludes & Nocturnes" story arc) of writer Neil Gaiman's celebrated series The Sandman and collaborated with Alan Grant on a Penguin story in Secret Origins Special #1. In 1993 Kieth created the original series The Maxx for fledgling publisher Image Comics. The Maxx ran 35 issues, all of which were plotted and illustrated by Kieth. William Messner-Loebs scripted #1-15 and Alan Moore wrote #21. In 1995, The Maxx was adapted as part of MTV's short-lived animation series MTV's Oddities. After taking a break from comics to pursue other interests, Kieth created the series Zero Girl for DC Comics' Wildstorm imprint in 2001. He followed that with the drama Four Women later that year and Zero Girl: Full Circle in 2003. In 2010, Kieth wrote and illustrated the original hardcover graphic novel Arkham Asylum: Madness, which spent two weeks on The New York Times Best Seller list, reaching number five in the category of "Hardcover Graphic Books."
“...as weird, twisted, and funny as you imagine it will be. It's exciting, dark, and full of twists and turns along the way.” —Pastrami Nation

“Sam Kieth makes a triumphant return to his beloved creation whilst at the same time pairing him with one of the all-time comic greats in Batman/The Maxx: Arkham Dreams.” —Multiversity Comics

“Beautifully done in so many ways. Go treat yourself to a read as soon as possible. Just maybe not right before bedtime, yeah?” —Big Comic Page