Enola Holmes: The Case of the Missing Marquess (Hardcover) 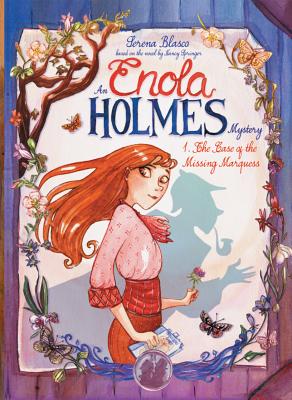 Enola Holmes: The Case of the Missing Marquess (Hardcover)

This is book number 1 in the Enola Holmes series.

Raised by her mother on the family's country manor, Enola wakes on her 14th birthday to discover that her mother has disappeared, leaving only a collection of flowers and a coded message book. With Sherlock and Mycroft determined to ship her off to a boarding school, Enola escapes, displaying a cleverness that even impresses the elder Holmes. But nothing prepares her for what lies ahead. Her journey quickly leads her into the dark and sordid neighborhoods of London where she finds herself involved in the kidnapping of a young marquess. Will Enola evade her two brothers and succeed in her new independent life, even as she continues to follow her mother's trail?

This delightfully drawn graphic novel adaptation also includes a portfolio of pages from Enola's secret notebook.
Serena Blasco was born in France and studied at the School of Applied Arts in Aix-en-Provence, worked as a graphic designer, and published her first comics work in 2014. She began illustrating the adaptation of Nancy Springer's Enola Holmes novels in 2015.
"The panel contents are lovely, done as painted watercolors and with plenty of key moments well-captured. The faces are exaggerated in shape for distinctiveness and emotion, and the pages are packed with plenty of panels for events and realizations.” —Johanna Draper Carlson, Good Comics for Kids, School Library Journal