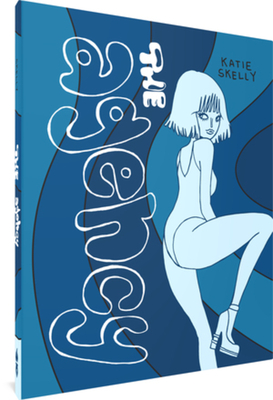 Each of the sex-positive short stories in this comics collection stars an agent who will go far-out (real far-out, like outer space) to accomplish her mission.

Skelly’s psychedelic sex romp originally appeared on the web (2014–2107) and was collected in a limited paperback edition — this is a newly expanded hardcover version, featuring an all-new story! In The Agency, Skelly’s agents gather intelligence, meticulously documenting a universe of sass photography, fascist surgery, horny skeletons, yonic portals, thrill-seeking vegetation, and multitudinous wry glances and stammered phrases! Each story in The Agency is executed in a different style/color palette, which taken together create a visually stunning collection greater than the sum of its parts. A must-have for fans who have discovered Skelly’s work more recently, through the hits Maids (2020) and My Pretty Vampire (2018).

Katie Skelly is a Los Angeles-based cartoonist whose comics include Nurse Nurse (SparkplugBooks, 2012), Operation Margarine (AdHouse Books, 2014), My Pretty Vampire (Fantagraphics,2017), and Maids (Fantagraphics, 2020). She has written and lectured about comics for outlets such as The Comics Journal, Fantagraphics Books, Japan Society, The Center for Cartoon Studies, Fordham University, and The New School.  She also co-hosts the podcast Thick Lines with fellow cartoonist Sally Madden. Skelly holds a B.A. in Art History from Syracuse University, and was awarded the Emerging Artist Prize at Cartoon Crossroads Columbus in 2015.
Skelly’s erotica, not unlike her long-form narrative work, privileges visualizing female pleasure, desire, and power in stories where narrative is not just a pretense for a good time. Rather, sex, suspense, and intrigue all mix and comingle.
— Rachel Miller, feminist media scholar

[Skelly] uses her paradoxical aesthetic—both heavily cartooned and broadly erotic—to affect her audience precisely how she wants to.
— The A.V. Club

I love Katie Skelly's linework, which flows across the page, making her the perfect artist to work on comics with a sexual feel to them.
— Panel Patter