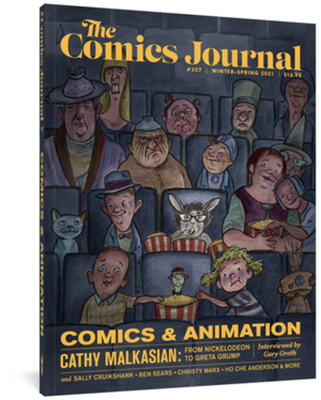 This issue of the award-winning magazine of comics interviews, news, and criticism focuses on the relationship between animation and comics. Gary Groth interviews this issue’s cover artist Cathy Malkasian (Eartha), the PBS/Nickelodeon animation director (Curious George, The Wild Thornberrys) turned graphic novelist, about her first middle-grade GN, NoBody Likes You, Greta Grump.

In addition to this issue’s featured interview with Cathy Malkasian, MLK graphic biographer Ho Che Anderson shares his animation storyboards, and Anya Davidson talks to Sally Cruikshank about how the underground comics movement influenced the latter’s aesthetic in a career that encompasses indie shorts and Flash animation, as well as work for feature film credits and Sesame Street. Other features include: an unpublished Ben Sears (Midnight Gospel) comic, and Jem and the Holograms cartoon creator Christy Marx talks about the behind-the-scenes advantages and disadvantages of both art forms. Plus! Sketchbook art by Vanesa Del Rey (Black Widow), an interview with Amazon warehouse worker-turned-cartoonist Ness Garza, Paul Karasik’s essay on an unseen gem, and much more. For more than 45 years, no magazine has chronicled the continuum of the comic arts with more rigor and passion than The Comics Journal.

Cathy Malkasian is an animation director and cartoonist. Her credits include Rugrats, The Wild Thornberrys film (for which she received a British Academy Award nomination), and most recently, over 20 episodes of Curious George for PBS since 2008. Fantagraphics has released several of her graphic novels including Percy Gloom (2007), Temperance (2010), Eartha (2017), and NoBody Likes You, Greta Grump (2021).

Gary Groth is the co-founder of The Comics Journal and Fantagraphics Books. He lives in Seattle.

Kristy Valenti is an Eisner-Award winning editor and a writer. She lives in Seattle, Wash.

RJ Casey is a publisher, editor, and writer. He lives in Tacoma, WA.
The Comics Journal [is the] storied arbiter of the indie-comics world.