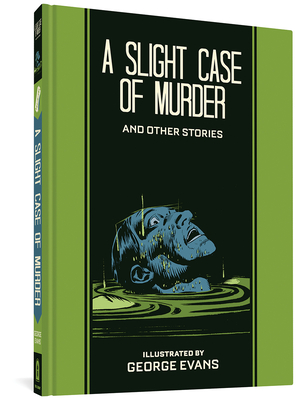 All of George Evans' EC horror stories, collected in one single volume!

This volume collects all of George Evans' EC horror. It features "Blind Alleys," one of the most chilling and famous EC stories (adapted for the 1972 movie Tales From the Crypt). A man who abused residents of a home for the blind winds up in an impossibly narrow corridor lined with razor blades as a ravenous dog closes in. "In Gorilla My Dreams," an innocent man's brain is transplanted into a gorilla ... who is then blamed for the death of his former self and hunted down. And in our titular tale, "A Slight Case of Murder," four pretty young women are each gruesomely murdered inside locked rooms with no way for the killer to get in or out. But one man thinks he knows who's behind it. In addition, A Slight Case of Murder and Other Stories also includes Evans's unforgettable adaptation of the Ray Bradbury story "The Small Assassin!" This book superbly showcases these classic comic book stories and enhances the reader's experience with commentary and historical and biographical detail by EC experts.

George Evans (1920–2001) worked as a World War II aircraft mechanic, which informed his depiction of all kinds of airplanes in breathtaking aerial acrobatics. He was the regular artist on the newspaper strip Secret Agent Corrigan (a.k.a. Secret Agent X-9) from 1980 until his retirement in 1996.

Albert B. Feldstein (1925-2014) was an American writer, editor, and artist, best known for his work at EC Comics (particularly in the science fiction genre) and, from 1956 to 1985, as the editor of the satirical magazine Mad.