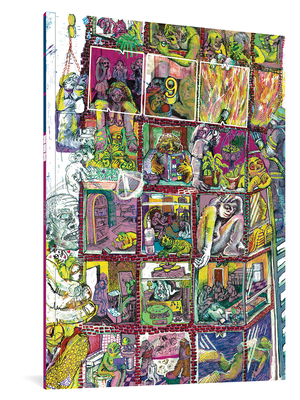 This Eisner Award-winning anthology series is a self-contained cross-section of the best short comics stories the globe has to offer, at a price point that is unrivaled in contemporary comics publishing.

Noah Van Sciver is an Ignatz award-winning cartoonist whose work has appeared in the Best American Comics series, the Fantagraphics anthology series NOW, and Mad magazine. His many graphic novels include The Hypo and The Complete Works of Fante Bukowski.  He lives with his family in Columbia, SC.

Eric Reynolds is the VP/Associate Publisher of Fantagraphics Books. He has curated well over 4,000 pages of comics anthologies, between ten volumes of Now, 22 volumes of Mome from 2005-2010, and several Free Comic Book Day anthologies for Fantagraphics. He lives in Seattle, WA, with his wife and daughter.
Editor Eric Reynolds has assembled a group of cartoonists who are fiercely confident in their unique approaches to comic book storytelling.
— The A.V. Club

The series editor, Eric Reynolds, does a commendable job exploring the various ways of presenting visual narratives. ... [I'm] impressed by [Jac's and Wolfe's] work toward extending the boundaries of the medium.
— The Book Beat