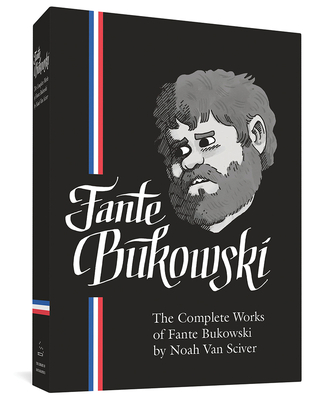 Living in a beat-up motel and consorting with the downtrodden as well as the mid-level literati, Fante Bukowski must overcome great obstacles — a love interest turned rival, ghostwriting a teen celebrity's memoirs, no actual talent — to gain the respect and adoration from critics and, more importantly, his father. Van Sciver has created a scathing, hilarious, and empathetic character study of a self-styled author determined that he's just one more poem (or drink) away from success.

This expanded edition includes a foreword by novelist Ryan Boudinot (Blueprints of the Afterlife), a facsimile reproduction of Bukowski's literary debut, 6 Poems (thought lost to time in the wake of a motel fire that destroyed the entire original print run), a "Works Cited" section, and a selection of "visual tributes" by over two dozen cartoonists including Nina Bunjevac, Simon Hanselmann, Jesse Jacobs, Ed Piskor, Leslie Stein, and others.

Noah Van Sciver is an Ignatz award-winning cartoonist whose work has appeared in the Best American Comics series, the Fantagraphics anthology series NOW, and Mad magazine. His many graphic novels include The Hypo and The Complete Works of Fante Bukowski.  He lives with his family in Columbia, SC.
[Van Sciver's] take-no-prisoners satire ends up being surprisingly sweet.
— Publishers Weekly

At its deepest, Fante Bukowski stands as a commentary on hordes of recognition-hungry artists with nothing to say, but as a straight parody, Fante Bukowski is hilarious enough to summon tears.

Readers may cringe at Fante's clueless self-delusion, but as irredeemable as he might be, they’re also likely to root for him just a bit.
— Booklist

Van Sciver has established himself as a thoughtful cartoonist with a talent for exploring the complexities of the human condition with a pointed sense of humor, and Fante Bukowski highlights the combination of desperation and foolhardiness that makes this character an especially compelling trainwreck.
— The A.V. Club

Van Sciver [has] struck gold with his masterful skewering of the self-important, self-proclaimed tortured geniuses who stink out the fringes of the literary world.
— Broken Frontier

Fante Bukoswki is the ne plus ultra of mediocre literary white malehood. In his sweaty desperation, his hapless thirst for fame (and beer), his talentlessness, Bukowski transcends fiction. He is in all writers.

As literary satires go, it’s both gleefully malicious and unrepentantly stupid — a winning combination, for the most part.
— The New York Times

Noah Van Sciver’s loutish wannabe writer Fante Bukowski is one of contemporary literature’s great antiheroes, bumbling from one humiliating catastrophe to the next with only the smallest glimmer of self-awareness.
— Forbes