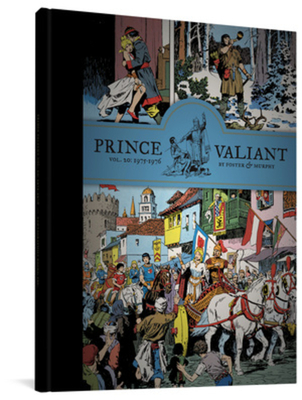 This is book number 20 in the Prince Valiant series.

Creator Hal Foster’s art returns for the Sunday newspaper comic strip series' 2000th strip, recalling the high points of the Prince Valiant legend. Then, Aleta’s younger sister Helene is gambled away by her husband to a Corsair mercenary, drawing Prince Valiant and his Singing Sword into a deadly duel. Includes a gallery of Hal Foster’s gorgeous art for the 1930 U.S. Naval Academy yearbook. Plus, an interview with Mad artist Angelo Torres, who assisted Prince Valiant artist John Cullen Murphy on the Big Ben Bolt strip.

John Cullen Murphy, a six-time recipient of the National Cartoonists Society's "Best Story Strip" for his work on Prince Valiant, continues to draw the strip from his home in Connecticut, while his son, Cullen Murphy, writes the strip in between serving as the Managing Editor for The Atlantic.

Hal Foster (1892-1982) created Prince Valiant in 1937. Though remaining involved with the strip until his death in 1982, Foster handed the bulk of the scripting and art chores over to his longtime assistant, John Cullen Murphy, in 1971.