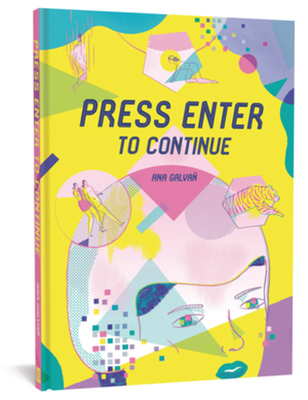 In her English language debut, Galvan utilizes swaths of electric and flourescent colors to create a series of short comics stories that intertwine and explore the dehumanizing effects of contemporary society.

Galvan's characters navigate a candy-colored world of geometric energy. Departments of inhumane resources dehumanize the people it is purported to protect; information is determinedly mined like the gold of the 21st century that it is; induced suicidal thoughts are a tool to manage overpopulation. Like Black Mirror, Galvan's near future is less paranoid dystopia than it is a logical extension of things to come, where the malice of large corporations manifests in small, everyday ways.

The Spanish artist Ana Galvan left advertising to pursue comics and illustration full time. Her work has appeared in publications such Spanish Fever, Nobrow, and many more venues. Additionally, she runs the website www.tiktokcomics.com, on which she has published various short comics.
Dynamic and otherworldly, Press Enter confounds the boundaries of both comics and visual art to show a world where technology distorts both time and space.

This artistic import comic, like a season of Black Mirror, will unnerve as it puzzles its readers, leaving them wary of the world around them after reading.

Galvañ's work is a welcome expansion of the familiar but still-rich genre of hi-tech futures on the fritz.
— PopMatters

When read in sequence, the aggregated ambiguity and absurdity [of these stories] results in a sense of unease and eventually awe at Galvan~’s originality and technical expertise.
— Library Journal